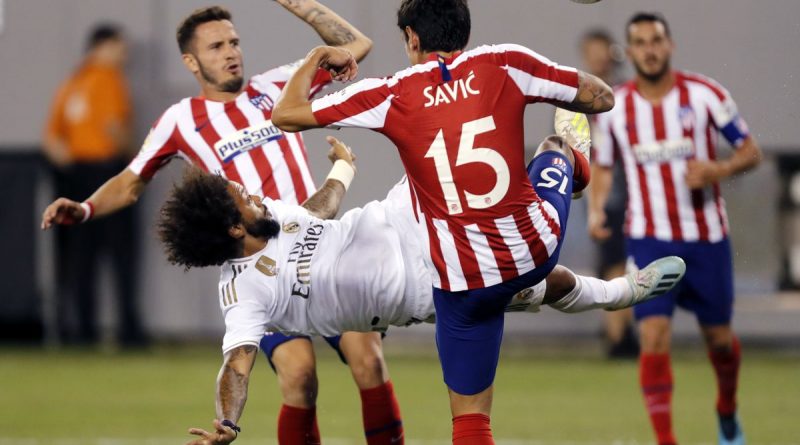 A fierce football rivalry will be rekindled on Saturday in La Liga when Atletico Madrid and Real Madrid clash in the Madrid derby at the Wanda Metropolitano.

The game, which will be the 165th encounter between both teams in La Liga, will be exclusively broadcast live on SuperSport Select 4 at 8pm to GOtv Max subscribers.

The two giants meet for the first time this season, although Atletico trounced Real 7-3 in a pre-season game in July.

Real Madrid, however, have recovered from their patchy pre-season form. They currently remain unbeaten and top the league table with 14 points after six games. Los Blancos manager, Zinedine Zidane, now has the full complement of his squad and can call on Karim Benzema, Gareth Bale, Eden Hazard and Vinícius Jr. in attack, while relying on midfield marshal, Casemiro, defenders Raphael Varane and captain Sergio Ramos to keep opponents at bay.

On the other hand, Atletico have endured mixed fortunes, losing and drawing one game apiece in their last three games. Los Rojiblancos, currently third, will however, want a change of fortune. Manager Diego Simeone can call on attackers Joao Felix and Diego Costa; midfielders Thomas Partey and captain Koke and defender Luis Jimenez.

Also on Saturday, Juventus, the Italian league champions, host SPAL. The game will be broadcast live at 2pm on SuperSport Select 5 exclusively to GOtv Max subscribers.

The Old Lady are trailing table toppers, Inter Milan, by two points and hope to close the gap or even get one better than their title rivals. SPAL have a daunting task, having lost four of their last five games, conceding 11 goals. Manager Walter Mattioli’s team will have a tough time trying to contain Cristiano Ronaldo, Gonzalo Higuain and Paulo Dybala, the likely attacking set-up to be deployed by his opposite number, Maurizio Sarri.

Two Premier League games are also scheduled for broadcast over the weekend, as Chelsea host Brighton Hove and Albion at Stamford Bridge on Saturday at 3pm, while Newcastle United travel to the King Power Stadium to face Leicester City on Sunday at 4:30pm. Both games will be broadcast live on SuperSport 2 to GOtv Plus and GOtv Max subscribers

Juventus will continue their match to advance from the group stage when they face German side, Bayer Leverkusen, at the Juventus Stadium on Tuesday at 8pm, while Chelsea travel to France to face Lille at 8pm. Both games are live on SuperSport Select 4, exclusive to GOtv Max subscribers.

Active and disconnected GOtv subscribers can take advantage of the ongoing Step Up campaign when they pay N2,600 and upgrade to GOtv Max while GOtv tops up the remaining N600.