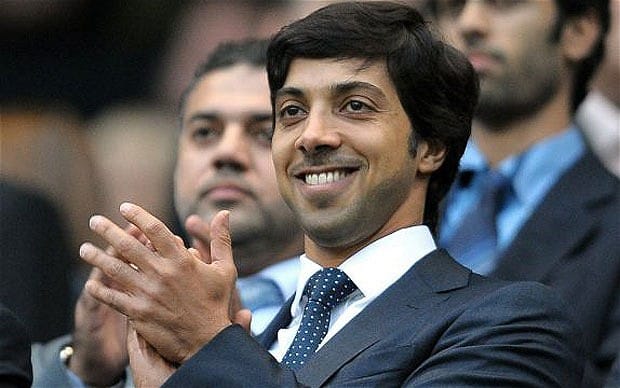 Man City boss Sheikh Mansour owns football teams, runs horse racing federations and is the deputy Prime Minister in his native United Arab Emirates. He also has a £400m yacht that he loaned to Leo DiCaprio.

The Manchester City owner has amassed a £17 billion fortune, mainly thanks to his booming International Petroleum Investment Company, according to The Sun report.

He’s also deputy Prime Minister of his native United Arab Emirates, minister of presidential affairs, as well as member of the ruling family of Abu Dhabi. The 47-year-old Sheikh is even buddies with Richard Branson, the report detailed also,owning a large stake in the British entrepreneur’s Virgin Galactic spaceship company.

And if that’s not enough, his Premier League team are bossing English football at the moment.

They could even add a Champions League crown to their trophy cabinet this season, which would make Mansour’s investment seem sound.

But who is Mansour and what does he spend his money on?

The Sun took readers into his world of wealth, including a £400m yacht he let one of Hollywood’s biggest movie stars borrow.

When you’re a billionaire, buying into sports franchises is the done thing.

In 2008 Sheikh Mansour bought Man City with his Abu Dhabi United Group for £210m and has ensured The Citizens buy the best talent in the world.

But the Sheikh is a shrewd businessman and doesn’t throw his money away that easy. In fact, the day City signed Gareth Barry for £12m from Aston Villa, he also made a $1.4bn profit selling a stake in Barclays he bought months earlier.

Mansour launched a second team in the MLS in New York in 2013, luring Frank Lampard and David Villa to New York City F.C. in recent years.

And he expanded his City Football Group portfolio with the acquisition of Aussie football team Melbourne City F.C. in 2014.

Looking at Mansour’s prized yacht is enough to make your eyes water… with tears of joy and wonder.

The fifth largest super yacht in the world, it’s an absolute BEAST. Named Topaz, the vessel is a 482ft and was custom-built in Germany by Lurssen Yachts and designed by Tim Heywood in 2012.

It has 8 floors, two helipads, three swimming pools, a gym, jacuzzi and even a cinema.

Right before Brazil kicked off their 2014 World Cup campaign, Leo DiCaprio was spotted hosting a party for 21 of his pals on the Topaz.

Mansour loaned it to the Oscar-winning actor who soaked up the carnival atmosphere in Sao Paulo with his mates.

Now, that’s not a bad number to have on speed-dial.

Recently it was reported that Mansour had to refuel his yacht when he docked at Marmaris port in Turkey.

Mansour owns a 5 percent stake in Ferarri, which he bought in 2005 with the idea of bringing Formula One to the United Arab Emirates.

To top off his exquisite collection, he has a Porsche 911 GT1, which is worth around £3 million.

Being a member of the Abu Dhabi royal family allows you certain privileges, including your own palace.

Sheikh Mansour is part of the Al Nahyan family, who have a huge residence in the city.

Private functions for political leaders, including Barack Obama have been organised there.

Back in 2016, Mansour reportedly snapped up a £42m 20,000 acre Spanish villa in south west Spain. The private property, called Los Quintos de San Martin, is near the small village of Valencia de las Torres. Mansour and his family have been known to stay at the hotel they own called The Emirates Palace.

There are 394 rooms, including 92 suites and 22 residential suits, which are mostly furnished in gold and marble.

Mansour is said to take advantage of the penthouse floor, which boasts 6 Rulers’ Suites that are reserved exclusively for dignitaries. Fun fact; the Fast and Furious 7 film was partly shot there too.

Educated at Santa Barbara College in California, USA, he has investments in around 50 companies worldwide.

One of his ventures includes the commercial spacecraft group, Virgin Galactic with Richard Branson.

He is also chairman of the Emirates Horse Racing Authority, boss of Sky News Arabia and patron of the Zayed Annual Half Marathon.

The Sheikh keeps his personal life… well, personal. But we do know he has two wives and 6 children.

He first married Sheikha Alia bint Mohammed bin Butti Al Hamed in the mid-1990s. They had one son together.

Mansour then married Manal bint Mohammed bin Rashid Al Maktoum, his second cousin once removed. She’s a powerful woman in her own right, being president of the Dubai Women Establishment.

She has two daughters and three sons by Mansour. However, that said, it’s an inheritance he must share with his 5-full brothers.

But you have to imagine with Mansour at the helm Man City’s future certainly looks rosy.