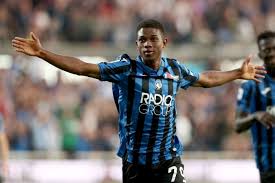 MANCHESTER UNITED target Amad Traore has been likened to Lionel Messi by an Atalanta team-mate.

The 18-year-old burst on to the scene with the Italian side last season, scoring on his Serie A debut against Udinese.

And amid interest from the Red Devils, team-mate Papu Gomez has compared his young team-mate with six-time Ballon d’Or winner Messi, The Sun reports.

“There are defenders in the first-team that sometimes cannot stop him. To stop him in training, we have to kick him.”

According to the MEN, United are keen on the Ivorian winger.

But they do NOT see him as an alternative to Jadon Sancho.

Traore appeared just twice more in Serie A after his goalscoring debut, making cameos from the bench against Juventus and Parma.

He appeared predominantly for Atalanta’s youth side last season, impressing with his performances.

And he also made an impression on the UEFA Youth League – scoring once and assisting a further three.

This form in UEFA’s junior competition earned him a spot in the matchday squad for the real thing, when Atalanta faced Shakhtar in the Champions League group stage.

If the Serie A side can fend off Man United’s interest this summer, they could send their promising teenager on loan to Parma for the upcoming Italian campaign.