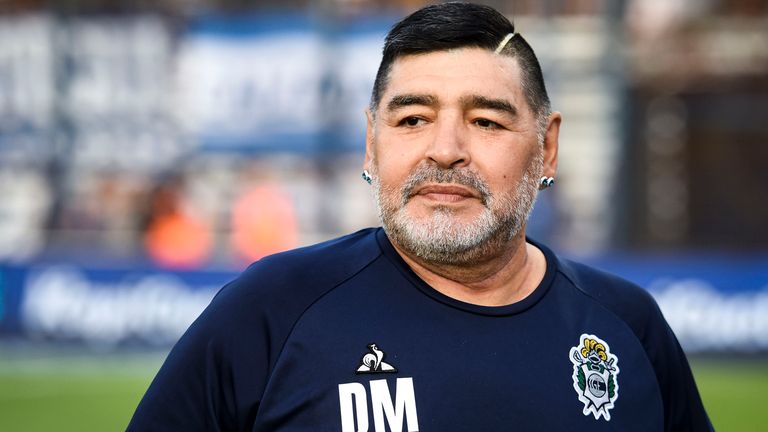 DIEGO Maradona’s personal doctor has protested his innocence and says he’s being made a “scapegoat” after police raided his home on Sunday.

In an emotional statement, Leopoldo Luque said he was “shocked” that he was being probed over alleged negligence amid reports the footballer’s death is being treated as manslaughter.

World Cup winner Maradona, 60, an icon in Argentina, died of heart failure at his home in Buenos Aires on Wednesday after a period of ill health.

Yet, two of the star’s daughters Dalma and Giannina told police yesterday they suspected the medication their father was given was not appropriate.

The Sun reports that on Sunday, following a 40 minute search on his home, Dr Luque said he “did the best” he could” for his “friend” – while revealing Maradona was battling addiction problems when he died.

With tears following down his face, he said: “I was shocked when police turned up at my door. I’m going to co-operate fully.

“I know what I did and what I did was for Diego’s benefit until the last moment. I did the best I could.

“I feel terrible because a friend died.

“I don’t blame myself for anything. It’s very unfair what’s happening.”

The distraught medic said he “didn’t see Diego’s daughters a lot” while insisting his “siblings and nephews adore me.”

Hitting out at the police probe, he said: “Someone is trying to find a scapegoat here when I don’t see one anywhere.

“We all did the best we could with Diego.”

He said Maradona – who had a brain operation earlier this month – looked “very down” in the days leading up to his death.

The doctor said the footballer had issues with pills and booze, adding: “He punished himself in a way I wasn’t going to allow, not as a doctor but as a friend.”

Describing the star as “difficult”, he said: “You couldn’t do anything if Diego didn’t want it.

“He hated doctors and psychologists. With me it was different because I was honest with him. He was my friend.”

Dr Luque said the former Barcelona and Napoli playmaker should have gone to rehab following his brain op.

He said: “If I’m responsible for anything when it comes to Diego, it was loving him and improving his life.”

Maradona led Argentina to consecutive World Cup finals in 1986 and 1990, winning the first, in a glittering career marked with controversy including drug addiction and involvement with the Italian mafia.

He was also kicked out of the 1994 World Cup for taking performance-enhancing drugs. He was tested after the game against Nigeria which eventually became his last international match.

The dramatic twist in the death probe followed overnight reports Diego had rowed with Luque in the days before he suffered heart failure.

Matias Morla said the first ambulance took more than half an hour to reach the star’s rented house north of Buenos Aires. He called the delay a “criminal idiocy.”

Mr Morla also complained Maradona had not received any medical checks in the 12 hours before he died, appearing to heap more pressure on Luque.

The legendary Argentine footballer was pictured with Luque after undergoing brain surgery – just two weeks before he suffered a fatal cardiac arrest.

Yesterday, it emerged Maradona’s nurse had admitted she lied about an early-morning check-up on him.

The sensational confession added more mystery to the circumstances surrounding his untimely death.

Initial reports pointed to a 24-year-old nephew, who was living with him, being the last person to see him alive over breakfast the day he died.

He was said to have told his relative: “I’m not feeling well” before going back to bed and dying in his sleep before investigators were told he had never got up on Wednesday to eat anything.

He scored 34 goals in 91 appearances for Argentina before he retired from professional football in 1997.