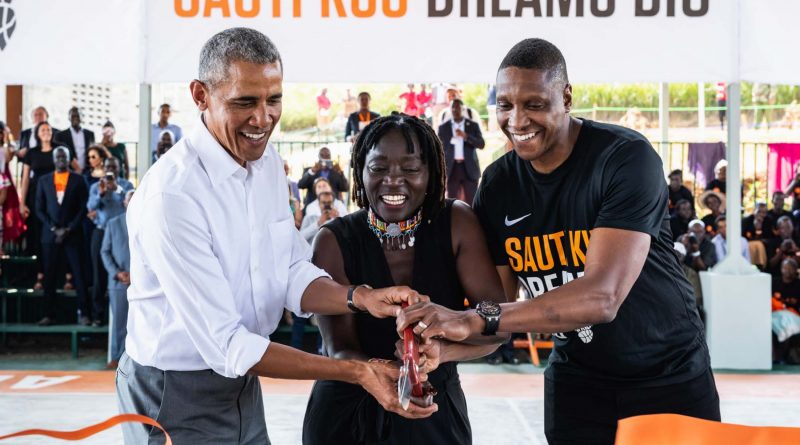 Giants of Africa basketball camp run by the Toronto Raptors President Masai Ujiri will tip off in Lagos on Tuesday, reports Extrasportsnigeria.com. The venue this time is the Sports Hall of the National Stadium and it will run until August 25. The specialist development programme for teenagers is unique this year as it is the 15th anniversary celebration.

Ujiri and his crew arrived in Lagos straight from Nairobi, Kenya where the programme rounded off on Sunday.

Just before the 2018 programme began in Kigali, Rwanda Masai said: “When I started Giants of Africa, I envisioned providing African youth access to the game and empowering them to achieve their greatest potential. With 63% of Africa’s population below the age of 25, we have a huge goal and responsibility to help them develop. We are excited that this year we are able to extend our reach further across the continent to help realize that dream.”

The foreign coaches named for the 2018 programme are Ujiri himself, Jama Mahlalela, Patrick Engelbrecht, Joe Touomou, Godwin Owinje, Harry Ezenibe, Eric Khoury and Arsalan Jamil. Most of these coaches have been working with GOA since inception. The Nigeria-based coaches are Adeka Daudu, Lateef Erinfolami, Emmanuel Odah, Peter Ahmedu and Michael Akuboh.

The organization will host girls’ camps in tandem with its boys’ camps in Kenya, Nigeria and Senegal. Giants of Africa will also activate local outreach initiatives in the communities of Kakuma, Maiduguri as well as Bingereville, Ivory Coast.