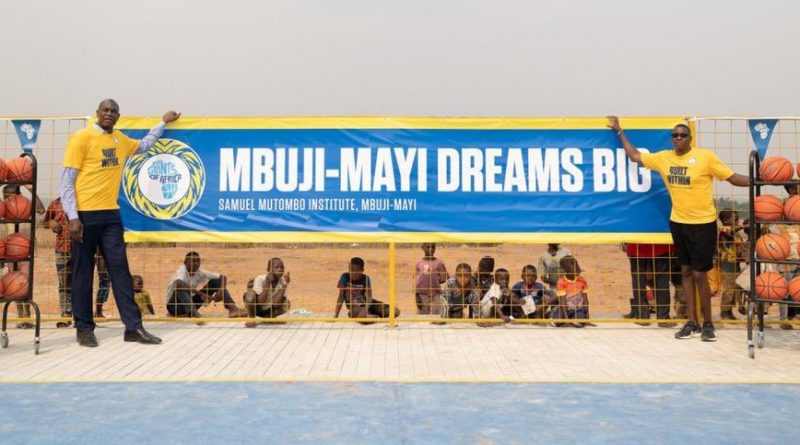 Giants of Africa and its co-founder, vice-chairman and president of the Toronto Raptors, Masai Ujiri, were in the Democratic Republic of the Congo just before the weekend to host a camp in Kinshasa, before visiting Mbuji-Mayi with NBA Hall of Famer and humanitarian, Dikembe Mutombo. They opened a newly built basketball court at the Samuel Mutombo Institute – a custom-designed space. It is the fifteenth court to be opened under Giants of Africa’s multi-year, 100-court investment in sports infrastructure across the continent.

The Democratic Republic of Congo stop will closed the foundation’s journey this summer, after conducting skills development camps for boys and girls in Burkina Faso and Benin – the first camps to be held in these countries over the foundation’s 19-year history. After a 3-year pause due to pandemic-related restrictions, the camps marked the return of Giants of Africa’s yearly tradition traveling the continent to grow the game and empower youth through education on and off the court.

“Sports have the power to inspire the next generation to dream big,” said Masai Ujiri. “With our commitment to creating sustainable, long-term opportunities for youth through building courts, while also developing basketball and life skills through camps, we strive to use sport as a tool to move the continent forward.”

When reflecting on the impact of the court on his native village, Mutombo commented, “When we built the Samuel Mutombo Institute in memory of my father, an esteemed and passionate educator, we wanted to provide access to modern education for hundreds of boys and girls in the community.”

He continued, “Beyond the classroom, I knew that I also wanted to give the youth an opportunity to learn and grow on the basketball court given how much the game has impacted my life and so many others. Thank you, Giants of Africa, for not only supporting our youth but our entire community.”

In Congo Masai said, “Being here in DR Congo with an NBA legend and personal friend, who has done so much for his community, is a reminder of the power of togetherness.

“Only through uniting and uplifting one another can Africa rise and reach its full potential.”

Since September 2021, Giants of Africa has built courts in Kenya, Tanzania, Nigeria, Burkina Faso, Ivory Coast and Rwanda under its “Built Within” initiative. This fall, additional courts will be unveiled as the foundation continues its journey towards achieving its 100-court commitment across the continent.