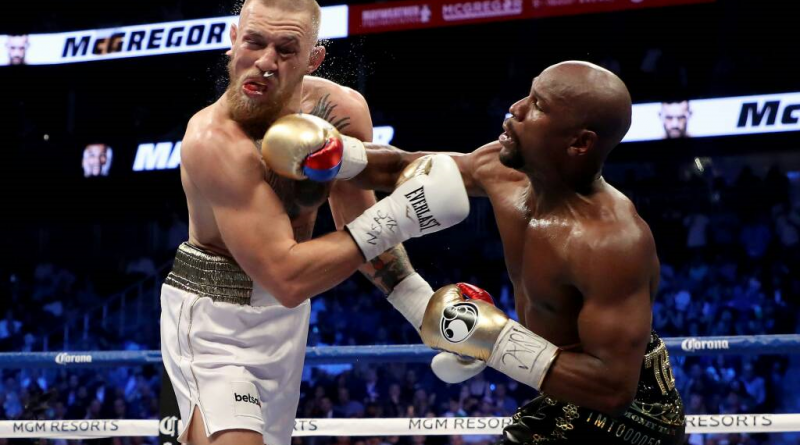 Mayweather ends career unbeaten on 50-0 with TKO of Irishman.
It had all the trappings of a big-ticket prize-fight: the glitzy Las Vegas backdrop, the arena-rock production values, the small fleet of celebrities and high rollers at ringside in well-cut suits and couture dresses, according to The Guardian report.
But it was an illusion, one that evaporated before the eyes of the countless throngs who believed that the boxing rookie Conor McGregor had any chance in a scheduled 12-round junior welterweight fight against Floyd Mayweather, the undefeated five-division champion and finest boxer of his era.
Mayweather needed three rounds to take the two-division UFC champion’s measure before spending the next seven walking him down, picking him apart and closing the show with a 10th-round knockout before a crowd of 14,623 at the T-Mobile Arena. Afterward he announced his retirement with a record of 50 wins in 50 professional bouts with 27 by stoppage. Not since a dubious points loss to Bulgaria’s Serafim Todorov at the 1996 Olympics has a fight ended without the American’s hand raised.
“Our game plan was to take our time, go to him, let him shoot his shots early and then take him out down the stretch,” said the 40-year-old Mayweather, who ended a bout inside the distance for the first time since a controversial knockout of Victor Ortiz six years ago and only the second time in a decade. “We know in MMA, he fights for 25 minutes. After 25 minutes, he started to slow down. I guaranteed to everybody that this wouldn’t go the distance.”
Early in the second McGregor was warned by referee Robert Byrd for hitting behind the head early as Mayweather continued to sit back and take the Irishman’s measure. McGregor even switched to an orthodox stance momentarily, which seemed to give the boxer pause. Yet the slow pace prevailed with Mayweather continuing to throw judiciously, mostly leading with jabs to the body.
Mayweather burst to life in the fourth, stepping into the pocket and landing a right hand and a hook to the body. He continued to close the distance and suddenly it was McGregor in retreat. It took a bit longer than usual, perhaps owing to the 714-day layoff, but Mayweather had zeroed in on his strategy: he was going to fight McGregor inside.
“I thought it was a little early on the stoppage,” said McGregor, who landed 111 of 430 punches (26%) compared to 170 of 320 punches for his opponent (53%). “I get a little wobbly when I’m tired. But get me in the corner and I’ll recover and I’ll come back. There’s a lot on the line here – he should have let me keep going until I hit the floor. I was just a little fatigued. He was a lot more composed, especially in the later parts of the fight.”
Afterward the fighters embraced in the centre of the ring surrounded by their handlers, smiles all around. And why not? McGregor had earned a minimum of $30m, a tenfold increase of his previous career-high purse of $3m, a total that could exceed $75m once his share of the pay-per-view receipts, live gate, closed-circuit revenues and foreign sales are tallied.
The numbers are even rosier for Mayweather, whose minimum purse of $100m matched the career-high guarantee he made for the Pacquiao fight. That total is expected to swell past $200m once his share of the promotion is accounted for.