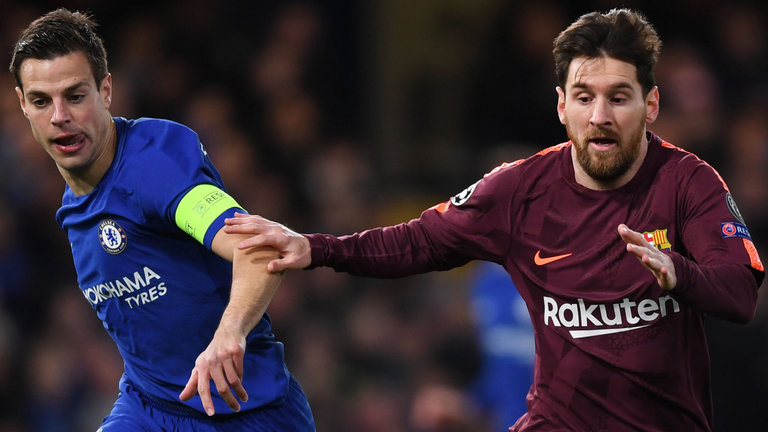 Barcelona’s Lionel Messi scored an equaliser to deny Chelsea a famous victory in the first leg of their last-16 Champions League tie at Stamford Bridge.

Willian, who had twice hit the post in the first half, put the Blues ahead with another low strike from outside the penalty area.

However, Antonio Conte’s side were only ahead for 13 minutes before Andreas Christensen played a loose pass and Andres Iniesta linked up with Messi, who slotted it past Thibaut Courtois, BBC reports.

The second leg takes place at the Nou Camp on Wednesday, 14 March and La Liga leaders Barcelona, with the benefit of an away goal, will be favourites to advance.

The result at Stamford Bridge does mean that none of the English teams have lost in their last-16 first-leg ties so far.

In Tuesday’s other Champions League match, German champions Bayern Munich thrashed Besiktas 5-0 after the Turkish side had Domagoj Vida sent off in the 16th minute.

Chelsea and Conte knew they needed a performance of fierce tactical discipline and near perfection to establish a platform for progress from this Champions League last 16.

And they came so close to achieving it until that moment in the 75th minute that might yet prove decisive in this tie.

Conte’s decision to play with Eden Hazard as a “false nine” and have plenty of bodies in and around Barcelona’s brilliant creators worked superbly as Willian gave them the lead they fully deserved just after the hour.

Only ill luck and both posts had prevented the hosts from building an advantage earlier. And Chelsea’s organisation and willingness to contest every situation frustrated Barcelona, even the world-class pairing of Messi and Luis Suarez.

And in Willian, Chelsea had the game’s outstanding performer as he rattled both posts and ran Barcelona ragged with his pace and strong running.

Stamford Bridge was just beginning to contemplate taking a precious lead to the Nou Camp when Christensen, outstanding for Chelsea this season, misplaced a pass across his own area with catastrophic consequences.

Iniesta picked the perfect pass for Messi to complete the formalities with a sweeping left-foot finish.

Chelsea and the work of their manager – who said he had suffered sleepless nights working out a plan to combat Barcelona – deserves so much credit on a night when they put their recent struggles behind them and looked much more like last season’s Premier League champions.

Chelsea had managed to establish an unlikely stranglehold on the genius of Messi… until he provided the emphatic finish that gave his side the crucial away goal on Tuesday night.

The 30-year-old Argentina forward had not scored against Chelsea in eight previous Champions League appearances – and for large portions of a high-quality game it looked like he would be frustrated once more. But it was not to be.