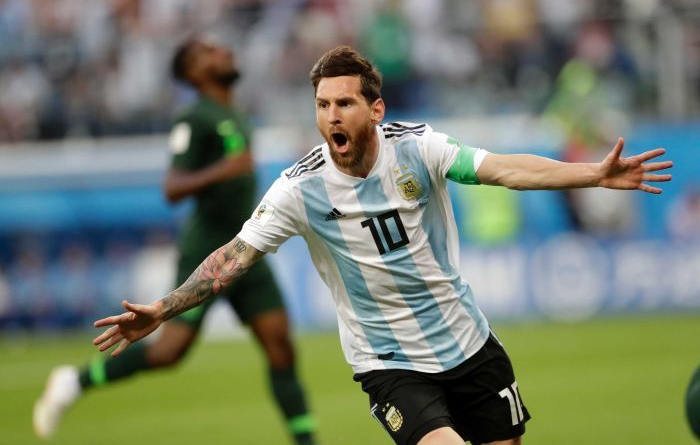 Lionel Messi has revealed that he wore a good-luck charm as they entered their do-or-die Group D clash with Nigeria in St Petersburg on Tuesday, Extrasportsnigeria.com reports. The Argentineans were condemned to be eliminated if they had less than outright win in the game having accrued only a single point from their opening two World Cup fixtures.

The pressured Barcelona attacker scored a quality goal, controlling a pinpoint pass from Ever Banega with two immaculate touches before blasting into the far corner with his third beating Francis Uzoho in goal for Nigeria.

Messi who spoke to the media following his side’s crucial 2-1 win, was asked specifically by Argentinean reporter Rama Pantorotto if he still had the amulet that Pantorotto gave him – via the reporter’s mother – in the lead-up to Argentina’s opening group fixture versus Iceland. This was detailed by The42 online report.

“In the first game, I gave you something from my mother,” Pantrotto told the Argentina captain as translated on r/Soccer. “I don’t know if you kept it or threw it away.”

Messi replied, “Of course,” before pulling down his left sock and revealing the amulet – a red ribbon with an owl medallion of some description – to the gathered press.

Messi: “Yes. So tell her that thank you, that…”

Reporter: “You’re shitting me. I’m about to have a stroke! For real. But wait! Did you score with the left?”

Messi: “No, with the right foot, but anyway…”

Reporter: “You scored with your right but it doesn’t matter.”