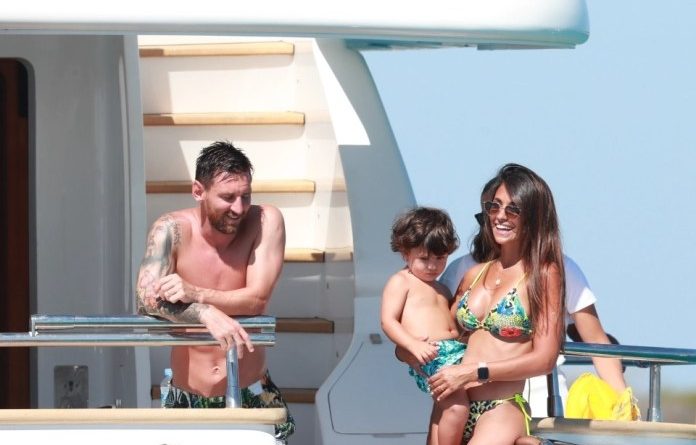 Lionel Messi and Luis Suarez were practically upstaged on a super yacht trip to Ibiza.

Messi’s stunning wife Antonela Roccuzzo did just that as the Barcelona duo and their families enjoyed some downtime together on a luxury superyacht.

The 32-year-old mum-of-three looked incredible as she soaked up the sun in a bikini, according to The Sun of UK report.

Messi and Suarez and their loved ones are holidaying in Ibiza after the conclusion of LaLiga.

But all that anguish and frustration looked a million miles away as the six-time Ballon d’Or winner topped up his tan.

And he showed how much he appreciated his wife of three years by giving her a big hug on deck.

Former Liverpool striker Suarez, 33, was there with wife Sofia Balbi.

The loved-up couple tied the knot in 2009 and renewed their vows after a decade of marriage last December.

Suarez and Messi both had fun on what looked to be a mini jet ski.

The underwater sea scooters retail for around £500 – small change for Messi, who made £88million last year, according to Forbes.

Messi and Suarez will next be in action on August 8 against Italian side Napoli when the Champions League returns. The first leg ended in a 1-1 draw but Barca will look to make home advantage count in the rematch at the Nou