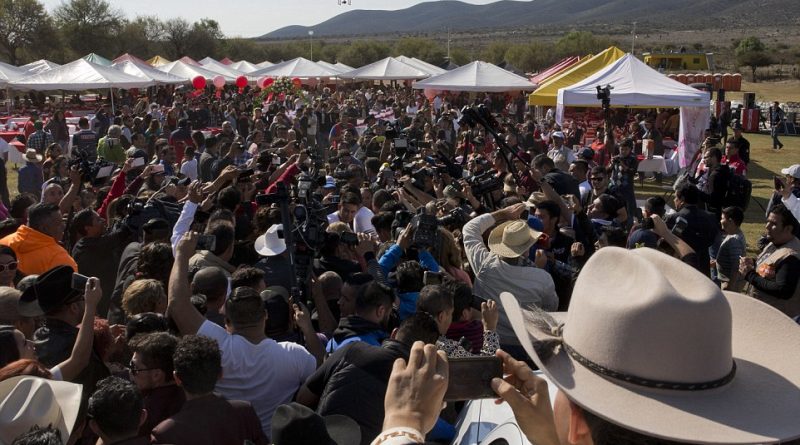 More than a million people RSVP’d to attend Rubi Ibarra García’s 15th birthday on December 26 after her parents posted a video invite on social media, which instantly went viral.

And while only a fraction of those people turned up at the party in the small village of La Joya, San Luis Potosi State, Mexico, the huge numbers were enough to overwhelm Rubi and her family, Daily Mail reports.

Pictures from the event show the teen being mobbed by guests and local media as she tried to make her way to Mass.

Rubi and her family looked miserable after the event was hijacked by the revellers who saw the invite on Facebook after they forgot to set the event to private.

“To all who have arrived I ask you please do not despair because we are really many people and we are just seeing how to speed things up,’ Rubi posted on Facebook, in Spanish.

“I just ask for your patience so that we can all enjoy this party that was made for all of you.”

Local media reported that the family were ‘annoyed with the media and with the people who do not respect the rules that they had established.’

The 15-year-old has become something of a local celebrity after her parents’ Facebook invite went viral.

In the 45 second clip, Rubi’s parents Crescencio and Ana Elda, stand on either side of her while her father calmly extends an invitation to her birthday party.

Her father says in Spanish, ‘Hello, how are you doing? We invite you on December 26 to our daughter’s Rubi Ibarra Garcia’s quinceañera party’

He also listed what bands will play at the blowout in the town of La Joya which is in San Luis Potosí, Mexico

It may not seem like a particularly exciting video but it has certainly captured the attention of people in Mexico who have lampooned it on social media.

There were more than 50 mock events on Facebook with thousands of people saying they will attend the party.

Rubi’s father reportedly contacted the creators of the fake events asking for them to be taken down, according toFox 5 San Diego.

A quinceañera is an elaborate celebration of a girl’s 15th birthday to symbolize her leaving childhood. Quinceañeras are usually celebrated by Latinas and their families and friends.