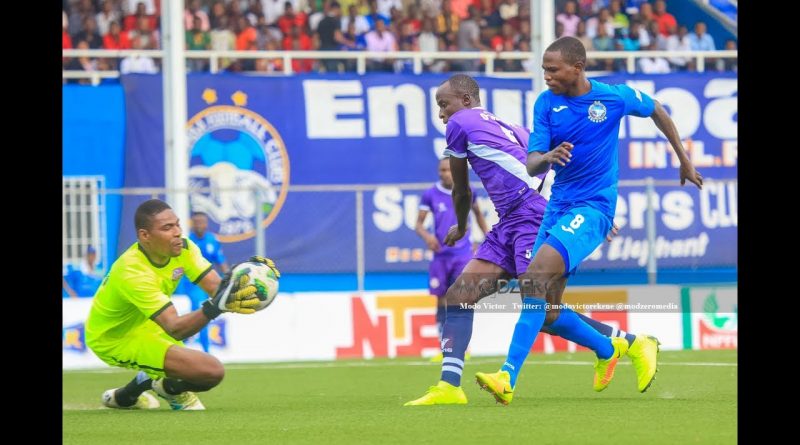 MFM and Enyimba battled to a 1-1 draw in their NPFL Matchday-13 encounter at the Agege Stadium, Lagos on Sunday, reports Extrasportsnigeria.com. The result means that MFM have failed to pull out a win in their last seven games.

It was Enyimba that took the lead after Abdulrahmam Bashir volleyed the ball home three minutes after the break. MFM would equalise through Chijoke Akuneto in the 65th minute.

Even though it has been a winless run for MFM, they have maintained their top position in the Group A table with 23 points from 13 games. Those Match-13 day guests, Enyimba are three points less in the second position from the same number of matches.

Justice Charles was the hero as Rivers United also ended their three games winless streak after securing a 1-0 away win against Remo Stars in Shagamu.

Justice scored the winning goal in the 70th minute.

In Group B, El-Kanemi Warriors defeated Akwa United in Maiduguri. It was the first defeat for Akwa in nine games.

Kabiru Balogun, Sanni Abbani,  Sunday Anthony and Bello Kofarmata (penalty) were on target for  the home team,  while Godspower Aniefiok got the consolation goal for Akwa United.

Okoko Emmanuel put Heartland ahead in the 12th minute, while Rabiu Ali equalised for the Pillars in the 23rd minute.

Ibrahim Idrissu own goal five minutes from time gave Heartland all three points in the game.

Lobi Stars were beaten 2-0 by Katsina United with Tasiu Lawal and Bashir Sheriff getting the goals. Lobi Stars officials had complained on Saturday that they were denied access to the match venue for their workout.

Nasarawa United secured the only away win of the week. They achieved that be beating Abia Warriors 1-0 in Umuahia with Sanusi Ibrahim netting the only goal of the game in the 65th minute.

Bendel Insurance beat Wikki Tourists 2-0 at the University of Benin Football Stadium. Junior Osagie and Adimorama Eze got the goals for the home team.