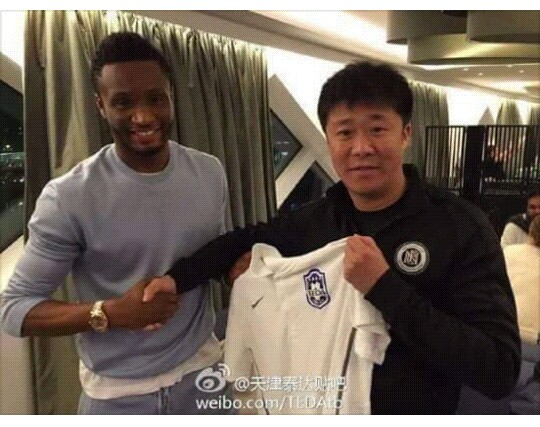 He is the latest star to head to the Chinese Super League, after the high-profile signings of Chelsea team-mate Oscar by Shanghai SIPG and Carlos Tevez by Shanghai Shenhua in recent weeks.

Midfielder Mikel has not featured at all for Chelsea under manager Antonio Conte, who took over in July.

“After 10 years, 374 appearances and 11 trophies, it is time for me to say goodbye,” Mikel said in a letter posted on his Twitter account.

“I haven’t featured as much this season as I would have liked, and at 29 I still have many years in the game ahead of me. With this in mind, I feel now is the time to seek a new challenge.

“I’m delighted to be joining Tianjin TEDA FC in China, at a time that the Chinese Super League is really taking off.

“I look forward to helping Tianjin TEDA FC continue to grow both on and off the pitch in the next few years.”

In his farewell letter, Mikel reflected on his career at Stamford Bridge.

“I joined Chelsea as a 19-year-old kid from the Norwegian Premier League, making my debut in the Community Shield,” he said.

Mikel gave no details about the contract he has signed.

He joined Chelsea from Norwegian side Lyon in 2006 following a legal wrangle with Manchester United, who had previously announced his signature.

The elegant holding midfielder picked up 11 pieces of silverware during his time at Stamford Bridge, including two Premier League titles, four FA Cups and the 2012 Champions League.

But he has not played a single minute of first-team football since the arrival of Conte, with N’Golo Kante, Nemanja Matic and Cesc Fabregas all ahead of him in the midfield pecking order.

Mikel has been capped 78 times by Nigeria, scoring five goals, and was a member of the team that triumphed at the 2013 Africa Cup of Nations in South Africa.

China ordered a clampdown on Thursday on the mega sums being shelled out on foreign football stars after the high-profile signings of Oscar and Tevez, reportedly now the highest paid player in the world commanding 38 million euros a season.

There has to be action against “irrational investment” and the government will “regulate and restrain high-priced signings and make reasonable restrictions on players’ high incomes”, a state General Administration of Sport spokesman warned.

Insolvent clubs could be kicked out of China’s Super League, which has been spending more than the English Premier League in recent transfer windows to draw top names.