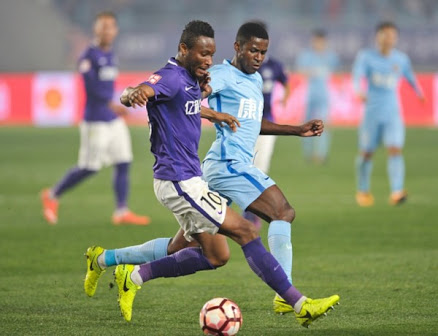 The Super Eagles midfielder hit target on 48 minutes before an own goal from Lifan’s Goran Milovic in the 82nd minute ensured victory for the hosts.

The goal was first for the Nigerian after three league matches. He joined the Chinese league from Chelsea, where he was not known to score regularly, in the January transfer window. He was not with the Nigerian team for the FIFA break in London where they played a friendly match against Senegal having been excused.

His Nigerian teammate at Tianjin TEDA Brown Ideye also featured in the match but was replaced in the 65th minute by Dong Wang.

While it was Mikel’s first goal in the league, the game was Ideye’s second appearance for team Mikel was mentioned as having played a role in getting the player from Greece to China.

Tianjin Teda are now eighth in the league table on four points after drawing and losing their first two games of the league season.