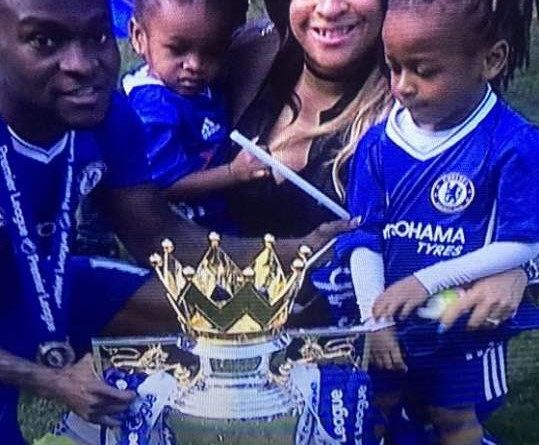 Nigeria winger, Victor Moses on Sunday lifted his first Premier League trophy as Chelsea thrashed Sunderland 5-1 at Stamford Bridge on Sunday. What a day it was for the player who had been continually loaned out to other teams until Antonio Conte gave him a Midas touch.

He was handed out during Jose Mourinho’s era to Stoke City, West Ham and Liverpool and never looked like he could ever get a place in the Stamford Bridge squad.

Goals from Willian, Eden Hazard, Pedro Rodriguez and a brace from substitute Michy Batshuayi ensured the Blues finished the season at home on a winning note.

Moses remarkably played 90 minutes on Sunday to cap his brilliant. He picked up his Premier League medal and thus becoming only the third Nigerian player to achieve that feat.

But he wasn’t going to let this moment pass without his family and brought his wife and two kids (Brentley and Nyah) to the pitch for a memorable photo with the Premier League trophy.