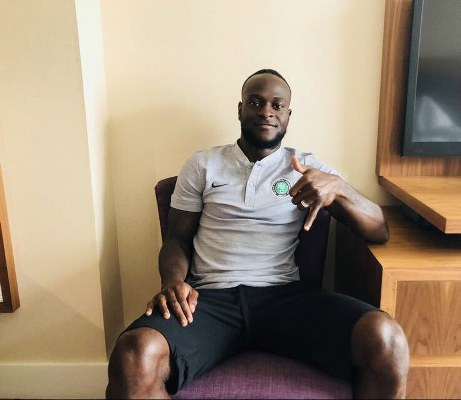 Chelsea wing back, Victor Moses says he is quite thrilled to have teamed up with his teammates in London ahead of the match against England at the Wembley Stadium on Saturday, reports Extrasportsnigeria.com.

Moses expressed his joy on Thursday via his Twitter handle soon after he arrived in the London camp.

The Super Eagles arrived in The United Kingdom on Wednesday without the player who Gernot Rohr confirmed had been granted a week’s leave as the rest of the squad began camping last week Monday in Uyo, South-South Nigeria.

He wrote, “Good to be back with the boys #SuperEagles.”

The Chelsea attacker’s arrival increased the number of players in the camp to 26 as the team captain Mikel Obi led 24 others to London from Abuja on Wednesday.

By the FIFA standard, only 23 players will make the squad for Russia 2018 where the team will face Argentina, Croatia and Iceland.