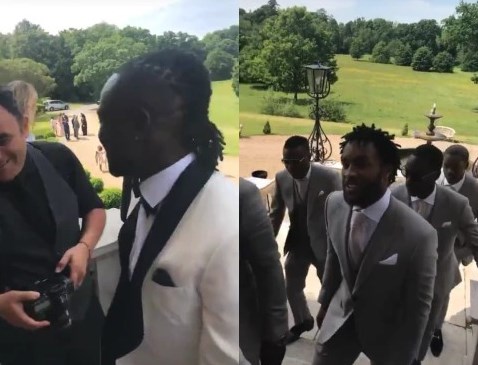 Nigeria and Chelsea forward, Victor Moses found a quick way of consoling himself from the FA Cup loss and a red card that went with it. On Sunday, he got married to his long time girlfriend and mother of his two kids, Extrasportsnigeria.com.

The marriage, though, came a week after winning the Premier League. The league title celebration was punctuated by Chelsea’s 2-1 loss to Arsenal. It appears the wing-back had target a triple celebration.

The long-time girlfriend, who Moses has carefully kept from the limelight, has given him a five-year old son, Bentley, and a two-year old daughter Nyah.

Mother and kids were at Stamford Bridge on May 21 to celebrate the league title with Moses after Chelsea’s last game of the season against Sunderland.

The pair exchanged marital vows in front of few family members, friends and colleagues and it was a real dodgy affair getting photographs out of the wedding ceremony.