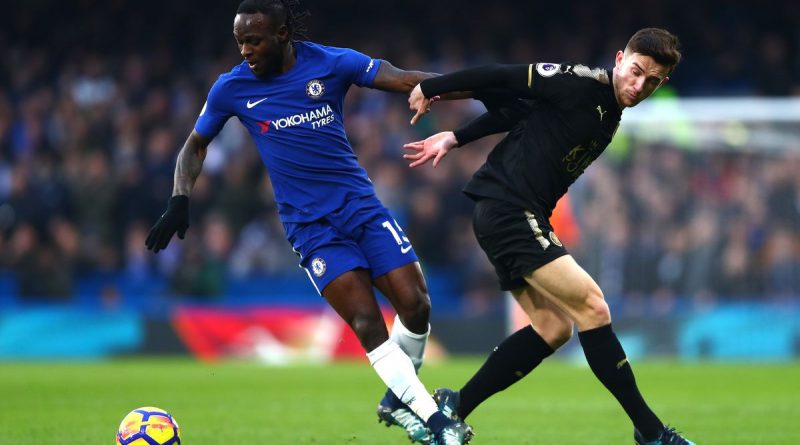 Chelsea were held to a goalless draw by Leicester City in a Premier League match played at Stamford Bridge on Saturday.

The match in London saw two Nigerians on the starting line ups of the two teams. Victor Moses started for Chelsea while his compatriot, Wilfred Ndidi made his 23rd top-flight start for the Foxes. Kelechi Iheanacho was on the bench for the visiting Leicester. The attacker who has found it difficult to break into the Foxes side since since his arrival from Manchester City did not play.

Ndidi came close to breaking the deadlock inside the opening 13 minutes, sending a strong header on goal from a corner which Thibaut Courtois was alert to get a hand to.

Mike Jones waved away a strong penalty appeal from City ten minutes after the restart after it looked Andreas Christensen had tripped Riyad Mahrez in the box as Claude Puel’s side sustained pressure on Chelsea.

After Ben Chillwell was sent off for a late challenge on Moses deep into the second period, the game looked there for the taking for the hosts who somehow mustered little in terms of threatening their opponents and had to settle for a third consecutive goalless stalemates in all competitions.

Chelsea manager Antonio Conte would have set a new record for most wins from his first 31 Premier League home matches if the Blues had defeated the Foxes but the record he shares with Jose Mourinho and Carlo Ancelotti still stands.

The three coaches accumulated 25 wins from their first 31 matches in the English top-flight.