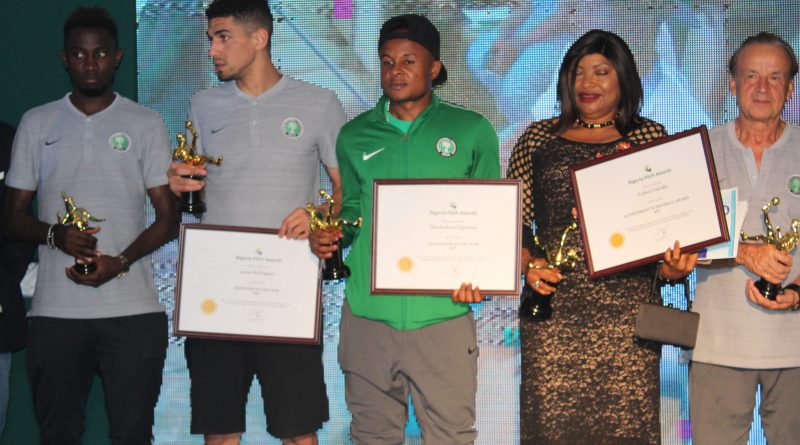 Chelsea and Super Eagles attacker, Victor Moses; Leicester City midfielder Wilfred Ndidi and  the President of the Nigeria Football Federation Amaju Pinnick were among winners at the 5th award ceremony of the Nigeria Pitch Awards held in Port Harcourt on Monday.

It was quite a night of glamour, cultural displays, comedy, musical performances at the Le Meridien Ogeyi Place venue of the event as the organizers hosted Pinnick; Shehu Dikko, 2nd Vice President; Aisha Falode, Chairperson of NWFL; Super Eagles coach, Gernot Rohr, his players and media personalities to a grand ceremony. The venue of the event was packed full with many football fans that had come to cheer their stars and winners.

Rohr while receiving the King of the Pitch trophy on behalf of Moses said he had given the player time off to celebrate his first wedding anniversary and to take some rest. Raising the trophy up, he praised the voters’ choice of Moses as the King of the Pitch and hoped the award would inspire others to work harder. Rohr who could not hide his delight excitedly announced that his team would be the youngest at the World Cup. He added that his boys had the character and discipline to succeed at the summer competition.

Moses and Asisat Oshoala were named King and Queen of the Pitch respectively. Pinnick won the Sam Okwaraji Award for commitment to Nigerian football. He grossed a total of 47 points to defeat his closest contestant who scored 21 points.

Pinnick commended the organizers of the awards noting that it was not easy to organise an award ceremony. He dedicated his award to his team of Dikko, Seyi Akinwunmi and Aisha Falode.

Other winners of the night are:

Ferdinand Udoh – Referee of the Year