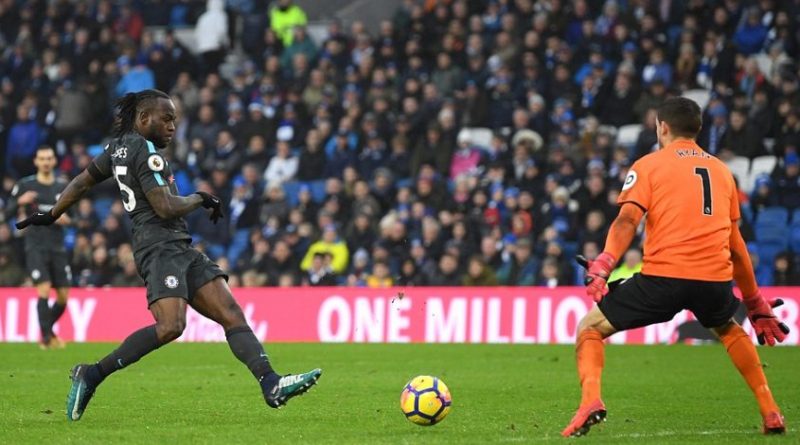 Chelsea handed a convincing 4-0 victory over Brighton on Saturday with Victor Moses scoring his first goal of the season.

The Nigeria international was named in the starting XI for Antonio Conte’s side away the Seagulls in a Premier League clash at the Amex Stadium, Extrasportsnigeria.com reports.

The result moved Chelsea level on points with second-placed Manchester United after two goals in the opening six minutes put them on the way to victory over a spirited Brighton.

Eden Hazard opened the scoring for the visitors with a neat finish from inside the box and midfielder Willian added a second from 18 yards, after a slick move that he started, to leave Chris Hughton’s side facing an uphill task, according to the BBC report.

The hosts’ response was impressive. They should have had a penalty when Chelsea stand-in goalkeeper Willy Caballero upended defender Ezequiel Schelotto, while Israeli striker Tomer Hemed was brilliantly denied by the former Manchester City shot-stopper.

Netherlands international midfielder Davy Propper headed against the post and Schelotto went close after the break as Brighton pushed to get back in the game.

Chelsea were always a threat though and Willian saw a free-kick pushed on to the post by Brighton keeper Mat Ryan before Hazard scored his second with a fine solo effort and Victor Moses’ late goal completed the victory.

Chelsea boss Antonio Conte could savour a first league triumph of 2018 for his reigning champions and a strong finish to the game, although he lost defender Andreas Christensen to a head injury in the second half and was already without captain Gary Cahill, keeper Thibaut Courtois and Cesc Fabregas from the start.

But Hughton’s concerns continue, despite his team’s battling qualities. This defeat means they have now won only one of their last 13 league games.