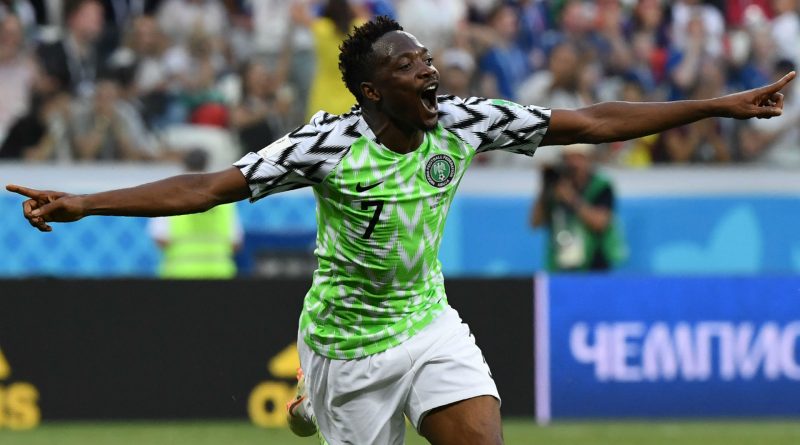 As the Super Eagles were about to file into their team bus to head to the Volgograd Arena on Friday, striker Ahmed Musa walked up to Nigeria Football Federation President, Amaju Pinnick and said, “President, please there is no need to look worried. We will make you proud.”

Pinnick responded, “You guys should just go out there and put smiles on the faces of Nigerians. They love their Super Eagles.”

Hours later, and after a dour first half, Musa remembered his pledge and firmly took matters in his hands, scoring two goals and rocking the crossbar as Nigeria descended on the Icelanders with vigour.

It is on record that the last four goals scored by Nigeria at the FIFA World Cup were by Ahmed Musa. Before Friday, the last two were in the game against Argentina in Porto Alegre, Brazil in June 2014. Nigeria eventually lost the final group phase encounter 2-3 but still progressed to the knockout rounds.

A year ago, the pacy forward was in the doldrums at English Premiership club Leicester City. He opted to return to former club CSKA Moscow, and has regained his form there. It was fitting that it was in front of the Russians that Friday’s spectacle was enacted.

Since winning the 2011 Africa U20 Cup of Nations title with the Flying Eagles in South Africa, Musa has never looked back. He has featured for the U23 team as well before promotion to the senior team, for which he has scored a number of crucial goals in 50 appearances. He is also presently Nigeria’s highest goalscorer at the FIFA World Cup, with Daniel Amokachi (2), Emmanuel Amuneke (2), Kalu Uche (2), Rashidi Yekini (of blessed memory, 1), Samson Siasia (1), Finidi George (1), Mutiu Adepoju (1), Garba Lawal (1), Sunday Oliseh (1), Victor Ikpeba (1), Wilson Oruma (1), Tijjani Babangida (1), Julius Aghahowa (1), Yakubu Ayegbeni (1) and Osaze Odemwingie (1) all trailing behind him.

On Tuesday, two-time world champions Argentina, who have only a point from their first two matches and a deficit of three goals, and with early elimination from the World Cup staring them in the face, must confront a man they know so well: Ahmed Musa.