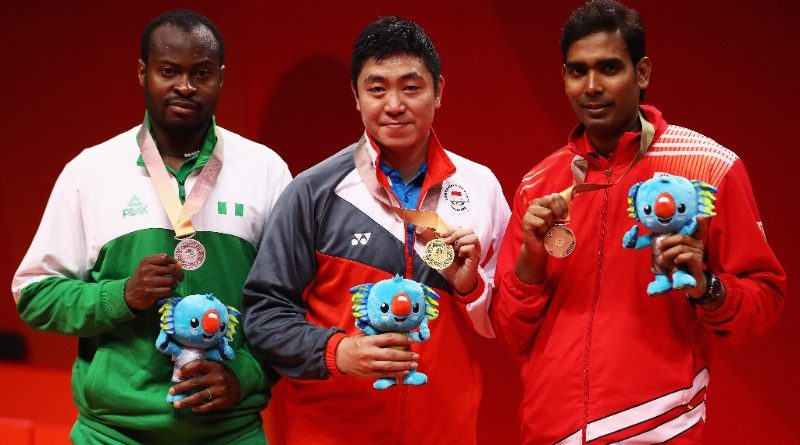 Despite missing out in the gold medal battle against Singapore’s Gao Ning, Nigeria’s Aruna Quadri has said that he was satisfied with the silver medal than going for bronze at the 2018 Gold Coast Commonwealth Games held in Australia.

At the 2014 edition in Glasgow, Scotland, it was same Gao Ning that edged out Quadri in the round of 16 but this year in Australia, the Nigerian seeded number one gave a good account of himself on his way to the final.

The final being the last match in the table tennis event of the games brought out the best in the two players with Quadri making excessive use of his powerful shot while the skilful play by the Asian star was what saw him through the explosive encounter.

A satisfied Quadri said, “Not the result that I wanted but I am still very satisfied with my performance and silver is better than bronze. I want to say thanks to the best club in the world – Sporting Clube de Portugal for giving me the opportunity to represent my country here in Australia. And to all the people cheering and supporting me, I want to say you are all well appreciated. To my prayer warriors, I am saying thanks for the unlimited support. And to my beautiful wife, @tejuluv thanks for the great role you played for making me not to lose hope of coming to Australia during sickness. It’s time to return to Portugal and face the next challenge in Portuguese league semi-final.”

With the silver medal, Quadri remains the second best players from Nigeria to play in the final of the men’s singles as he failed to equal the feat of his compatriot – Segun Toriola, who won the men’s singles title at Manchester 2002 in England.