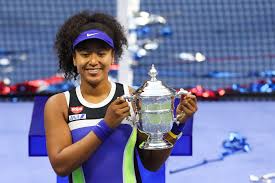 NAOMI OSAKA underlined her status as the leading female tennis player of her generation as she won a second Australian Open.

The Japanese athlete, already the highest-paid woman in professional sport, was Queen of Melbourne following a 6-4 6-3 victory over American rookie Jennifer Brady on the Rod Laver Arena.

The 23-year-old, who earned endorsements of £24million in 2020 according to calculations by Forbes, is a prolific winner, collecting four slams from her past eight appearances.

Of the active players on the circuit, only the two Williams sisters, Serena and Venus, have won more majors.

And though she is not officially No.1 in the world – that honour belongs to Australian Ash Barty due to a change in the rankings system post-Covid – it’s fair to say she is the leading woman wielding a racket right now.

Osaka said: “I’d like to thank my team. I have been with them too long, all through quarantine, but they are like my family.

“They are the ones with me through training, my matches, the nervous talks. This one is for you.

“This feels incredible. I didn’t play my last slam with fans so to have this energy means a lot. Thank you for opening your hearts and arms towards us. Playing a Grand Slam is a super privilege and one I won’t take for granted.”

By rights, Brady should not have been in this position given she was one of 72 players who underwent hard hotel quarantine last month following a confirmed Covid-19 case.

It was her good fortune that she was hotel neighbours with her fitness trainer – the pair could exercise together thanks to an interconnecting door and not break rules – and she emerged from the 14 days in decent physical shape compared to rivals.