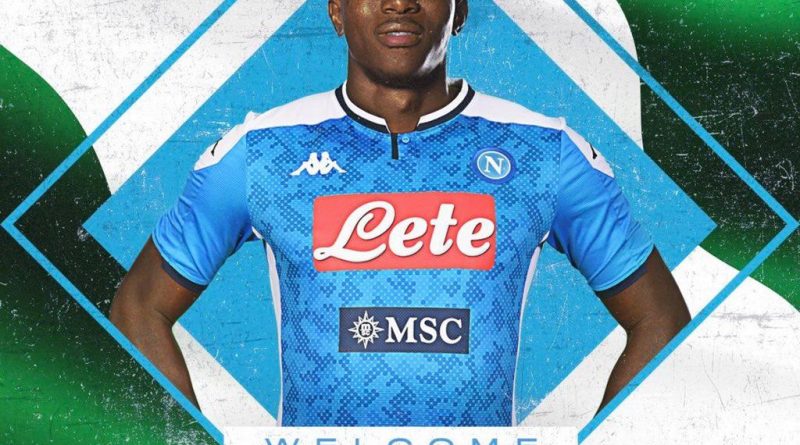 Victor Osimhen has officially signed for Napoli, and this was announced by Napoli President Aurelio De Laurentiis Friday afternoon. This finally completes the deal with Lille.

The young Nigerian signed a five-year contract with the Italian club. Osimhen has also made confirmation using his Twitter handle.

“Can’t wait to put on this iconic jersey, thank you for the warm welcome Napoli,” wrote Osimhen on Twitter.

He completes it with this: “Mom and dad proud for sure.”

The 21-year-old Nigerian striker lost his father in June during Covid-19 pandemic lockdown. He becomes one of the most expensive African players of all time, reportedly at €60m including bonuses, while goalkeeper Orestis Karnezis is moving to Lille as part of the deal News Italia confirmed.

He is also the most expensive signing in Napoli’s history, a record that was set last summer by Hirving Lozano from PSV Eindhoven for €38m plus bonuses.

French and Nigerian reports continue to insist the price was €81m, but that probably includes his salary. The Mailonline reported it as a £74million deal.

The Super Eagles attacker will wear the Number 9 jersey, which is currently held by Fernando Llorente.

Lille purchased him from RSC Charleroi last summer for €14m and he scored 18 goals with six assists in 38 competitive games for the French side this season.

“SSC Napoli are delighted to announce the signing of Victor Osimhen from Lille on a permanent transfer,” read the Napoli statement.