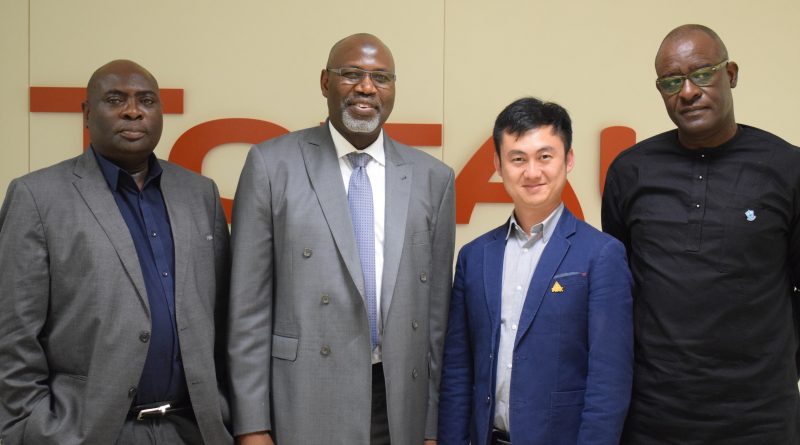 Chinese sportswear and equipment manufacturing company, Peak Sports Products Co. Limited have met with the President of the Nigeria Basketball Federation, Musa Kida and some the federation members to review its sponsorship deal with Nigeria.

The delegation from Peak led by its Brand Vice Director, Tony Lin arrived in Nigeria on Sunday and met with the federation on Monday and Tuesday to iron out grey areas surrounding the national teams’ kit sponsorship deal.

The long awaited meeting which is taking place 10 months after Kida assumed office was arranged by Peak and the federation to review all existing contractual arrangements between both parties.

Kida said the meeting became necessary going by the recent pronouncement of FIBA empowering the federation to “organise all aspects (including sporting and commercial) of Nigerian Basketball’s international representation.”

The meeting which also had in attendance NBBF Vice President, Babatunde Ogunade and Col. Samuel Ahmedu (retd) provided the opportunity to evaluate the commitment of Peak, terms and conditions of the deal signed by the former board and ways to maximize the benefits for both sides.

Kida said, “Since the former board did not hand over to us, it became pertinent to review all existing contractual agreements entered into by the former board. This will help us to ensure that we meet our set objectives and demands as a responsible organization.

“Without mincing words, our achievements over the last 10 months, consistent participation and success stories have continued to gain global attention with many now taking Nigeria serious.

“We have already booked our ticket to the 2018 FIBA women’s World Cup in Spain while the D’Tigers have also won all their 3 World Cup qualification games played so far. In June, we will be hosting our group games in Lagos which will technically brighten our chances of qualifying for the men’s World Cup in 2019. All these achievements have not gone unnoticed by all.”

Responding on behalf of Peak, Lin said the firm would always be glad to have Nigeria as partners going by its growing status.

“We have been closely monitoring the achievements of the various national teams in the last 10 months and we are more than impressed. After studying the situation on ground, we thought it best that in the interest of both parties; there was a need to meet.”