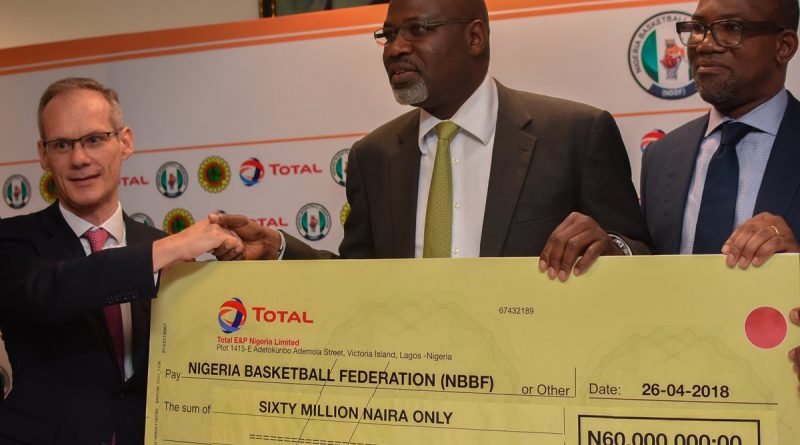 The Nigeria Basketball Federation (NBBF) has signed a sponsorship deal with Total E&P Nigeria. The public presentation ceremony was held on Thursday at the oil company’s head office in, Victoria Island, Lagos.

The two-year sponsorship deal is worth N60 million covers the Division One and Two leagues.

The NBBF President, Musa Kida, said the deal was a “major breakthrough” for the domestic league. It is the first time that the federation’s lower leagues have received corporate sponsorship in the last four decades or more.

Kida said, “This partnership with Total E&P Nigeria Limited is in fulfilment of one of my cardinal objectives as the president of the federation.

“One of my cardinal goals and objectives as president of NBBF is to take basketball to the grassroots so that our youths and other stakeholders of the game who have been neglected for so long would have the opportunity of competing effectively right in their backyards.

“The NBBF board has decided to formulate a new league format for the lower divisions to maximize the likely benefits thereof, as we work around the clock to deliver on our promise of securing a better life for players and officials who are the major actors in our quest to take basketball to its desired level.”

Kida who led a large turnout of board members and stakeholders in the game in Nigeria on behalf of Nigeria basketball family Total for the sponsorship.

“This commitment which underscores the importance the company attaches to its corporate social responsibility is geared towards uplifting the Nigerian youths is an epoch event in the annals of Nigerian basketball because it is the first time the federation is securing sponsorship for any of its lower leagues,” Kida said.

The Managing Director, Total E&P Nigeria, Nicholas Terraz, said the partnership is the start of a journey that will benefit the NBBF and the company.

“Today, we take the bold step to sponsor Nigerian basketball. By so doing, we acknowledge that we are part of the makeup of Nigeria where we have been for more than 60 years. We are only too aware that in Nigeria, sports simply mean unity, friendship, solidarity and energy.

“We want to sustain this energy with the agreement we are signing today.”