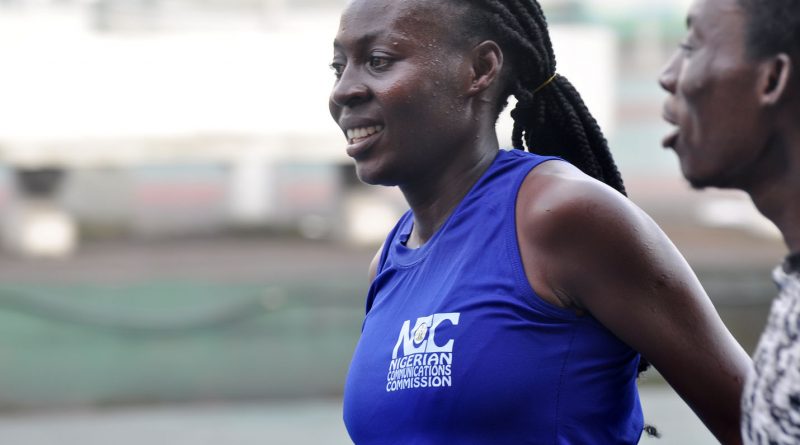 Team CBN Futures – a team of the best juniors in Nigeria – finally won a tie in the third edition of the NCC Tennis League when they defeated Team Yetade of Ado Ekiti 6-1 in a match the youngsters hosted at the National Stadium, Lagos, Extrasportsnigeria.com reports.
CBN Futures won the four men’s and one ladies’ singles as well as the mixed doubles – conceding only the men’s doubles where Stephen Augustine and Emmanuel Jebutu held a match point before the Team Yetade pair of Kayode Olawolu and Opeyemi Odeyemi rallied to salvage a match.
Augustine had the CBN Futures team on the victory path when he easily beat Odeyemi 6-3, 6-1 in the first singles. Godgift Timibra followed with a close 6-4, 2-6, 6-2 win over Olawolu and Toyin Osogba edged Akosile Afolarin 6-3, 5-7, 6-4 to give the fast improving juniors a 3-1 lead on the opening day.
Team CBN Futures returned on Sunday to complete what for them will be a milestone.
Timibra beat Michael Olajimbiti of Team Yetade 6-4, 5-7, 6-3 in the first reverse singles and Jebutu overwhelmed Olawolu 6-4, 2-0 (Scratch). The pair of Augustine and Omolade Aderemi rounded off the tie by defeating Omodara Ayodeji and Afolarin 6-4, 6-2 in the mixed doubles.
Kayode Savage, the coach of the CBN Futures said, “I am very happy with the outcome and impressed that these juniors can play with so much determination and confidence.
“It could have been a clean sweep if we did not drop the match point and I am sure going forward the boys will no longer have any fear or respect any team too much.”
In the Abuja game, the expected upset of the defending champions, Team Offikwu, by host Team Ndoma-Egba did not happen as two former champions – Shehu Lawal and Henry Atseye combined with Sarah Adegoke to snatch a 5-2 victory.
Lawal beat Emmanuel Paul of Team Ndoma-Egba 6-1, 6-4 in the opening singles and Thomas Otu then levelled scores by edging Atseye in a nervy match of two ex champions 3-6, 6-4, 7-5. Adegoke then put the visiting team ahead with a 6-3, 6-4 victory over Osareme Airhunwhunde and the defending champions then took a stranglehold on the tie with the pair Lawal and Atseye overcoming Otu and Taiwo Owolabi 7-5, 6-4 in the men’s doubles.
Otu beat Lawal in the first reverse singles to close the gap to 2-3 but Atseye called on his wealth of experience saving a match point and coming from behind to pip Emmanuel in three sets to put the tie beyond the reach of the host team. Lawal and Adegoke came from a set down to win a very exciting mixed doubles match that effectively secured a semi-final place for the defending champions.
In a tie of two equally matched teams in Ilorin, Team Teach Vibe of Jos beat hosts Team Goshen 4-3 to stop the unbeaten streak of the Ilorin team. Team Goshen which was in contention for a semi-final place now has to beat Team Ndoma- Egba to qualify.
Musa Bala, who had an outstanding tie, won his two singles matches beating Emmanuel Omeruwa 6-0, 6-1 and Joseph Iyorouvbe 6-3, 6-3 but lost a tight men’s doubles with Adehi Ochei to Iyorouvbe and Owolabi Jinadu 7-5, 5-7, 10-8.
Team Tech Vibe’s No.2, Michael Michael, also won two singles matches to secure the tie for the Jos team. Michael defeated Iyorouvbe 7-5, 6-1 in the first and Jinadu 6-2, 7-6 in the reverse.
The other two points for the host team were won by Patience Onebamhoin who defeated Abies Amadasun 6-2, 6-1 and the mixed doubles pair of Jinadu and Onebamhoin who beat Bala and Amadasun 6-2, 6-3.