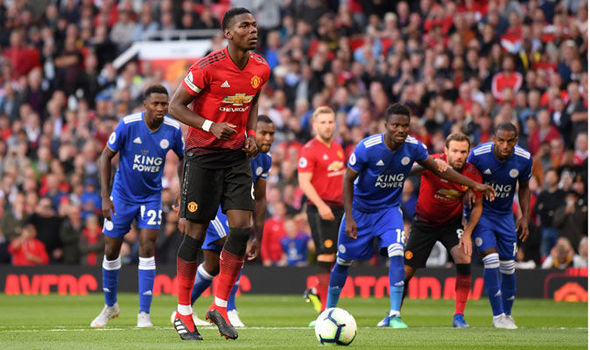 Nigeria internationals Wilfred Ndidi and Kelechi Iheanacho starred as Leicester City fell to a 2-1 defeat at Old Trafford against Manchester United in the opening game of the 2018/19 English Premier League season, reports Extrasportsnigeria.com.

In the Friday night game, Iheanacho led Leicester City’s attack and featured in all 90 minutes just as his Super Eagles teammate Ndidi did in the midfield.

United captain Paul Pogba scored the opening goal as the Red Devils beat Leicester in the first game of the Premier League season.

United had a frustrating summer, unable to sign any centre-backs and with Jose Mourinho looking increasingly irritated.

But that did not hinder them too much as they made a flying start, winning a penalty in the second minute when Daniel Amartey handled Alexis Sanchez’s deflected shot, according to the BBC report.

France midfielder Pogba stepped up and after a slow run-up placed the ball in the top-right corner above Kasper Schmeichel. The World Cup winner had not even expected to start, having only returned to training on Monday.

Left-back Luke Shaw then scored the first senior goal of his career after controlling Juan Mata’s aerial pass to double their lead.

The Foxes had edged the first half following their early setback with debutants James Maddison and Ricardo both forcing saves from David de Gea.

The second period was a slightly tamer affair before the late goals, although United substitute Romelu Lukaku was denied a goal by a good Schmeichel save.

It is the third year in a row Leicester have conceded the opening goal of the season – having lost to Hull and Arsenal in the first games of the previous two campaigns.