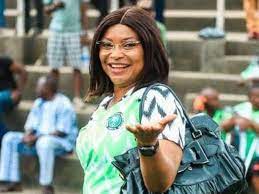 The Nigeria Football Federation has announced the appointment of NFF board member and the Chairperson of the Nigeria Women Football League, Aisha Falode, as the Chef de Mission/ Leader of Delegation for the Super Falcons trip to Morocco for the 2022 CAF African Women Cup of Nations.

The NFF President Amaju Pinnick who signed off the letter noted that Falode was the Leader of Delegation to the Ghana 2018 Women’s Nations Cup which Nigeria won, and she has been found worthy to help motivate Nigeria to yet another edition of the competition. NFF believes Falcons need strong motivation especially as the team is going for the 10th title of the Nations Cup.

“She, in her capacity as Leader of Delegation can ask anybody not part of the team to leave the team’s camp. She is the eye of the Nigerian government for the team in Morocco,” Pinnick was quoted as saying.

The African champions left Lagos for Morocco on Monday where they are camping for one week before the competition kicks off. Falcons will take South Africa’s Banyana in their opening match of Group C.