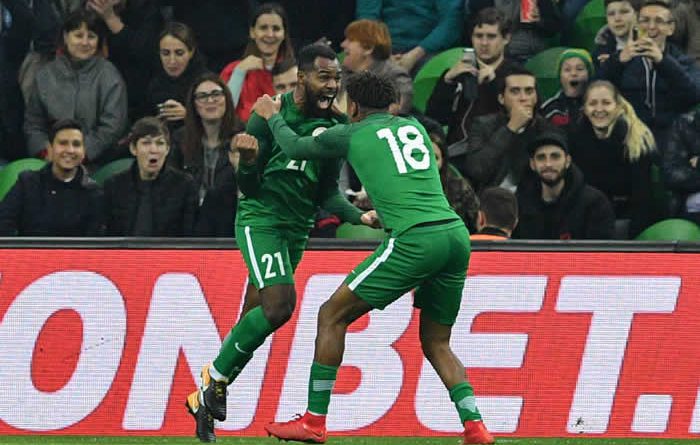 An  agreement that targeted at eliminating all manner of rancour and distractions around Nigeria’s preparation and participation at the 21st FIFA World Cup finals in Russia was signed in the Russian city of Krasnodar on Tuesday morning ahead of the game between Nigeria and Argentina which the Super Eagles won by 4-2.

The meeting to prepare the agreement was held on Sunday night in the same city.

Before the meeting, Pinnick, who made an impressive remark at the FIFA World Cup Trophy Tour that made a stop in Krasnodar on Tuesday, told thenff.com that the NFF was determined to, with the single agreement, put behind it all the crises and confrontations that had bedevilled African teams’ participation at the FIFA World Cup in the past.

At the end, NFF 2nd Vice President/Chairman of Strategic Committee Shehu Dikko confirmed to thenff.com, “We have done it; we have concluded negotiations and come to agreement with the team as regards bonuses, allowances and share of income from FIFA for the 2018 World Cup. Every detail has been agreed on match bonus for each match and each round up to the final as well as share of income from FIFA money for each round until the stage we are able to get to at the finals.

“We also agreed on preparation, such as how much players will be paid for the friendly matches, including how and when the monies would be paid. We even delved into how the NFF would apply the funds due to it from FIFA after paying the players their share.”

“The agreement represents the full and final understanding between the NFF and the team for the 2018 FIFA World Cup Russia and not subject to review or negotiations, except there is a review by FIFA of what it has approved and published as prize money for the participating countries.

“We have opted for this international best practice in order to fully motivate the team and ensure there are no distractions or discontent before and during the tournament,” Dikko added.

It is the first time in the history of Nigeria’s participation in international championships that a formal agreement between the federation and the team is documented, and the major actors see this as a catalyst for the Super Eagles’ best performance ever at the FIFA World Cup.

“We are very happy and excited with this development. This is the first time since I started playing for the senior team that I would see everything regarding preparation and bonuses and allowances put down in black and white and a binding agreement executed. It is reassuring that we now have a federation leadership so committed to making everything work that they arranged this meeting and allowed the players to contribute and then set out to sign the agreement,” Mikel said.

At Brazil 2016, Eagles missed a training session in protest over bonuses and allowances and share of the income from FIFA, forcing the Federal Government to dispatch then Sports Minister Tammy Danagogo to Brazil with millions of dollars in cash. At the France ’98 edition the players and officials argued over cash until early morning and thereafter lost 4-1 to Denmark.

A similar situation played out in the camp of Ghana’s Black Stars, and back in 2006, the camp of the Togolese national team was torn by disputes over bonuses and allowances.

Pinnick later said, “We communicated to the Honourable Minister of Sports on the negotiations and he endorsed the agreement on behalf of the Government. He also applauded the NFF for the bold step to sort out all issues that could militate against Nigeria having a great outing at the World Cup finals in Russia next year.”