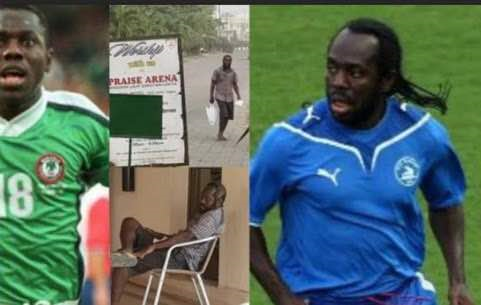 Recuperating former Nigeria international Wilson Oruma is set to watch the Super Eagles at World Cup live from the stands in Russia. This is a part of an elaborate programme of the Nigeria Football Federation to help the distressed ex-Eagles midfielder back to his feet.

The former Nigeria U17 captain is an undisclosed hospital as doctors work to stabilise his emotional state. Late on Thursday a link between Oruma and friends trying to help the player informed the group which a reporter of Extrasportsnigeria.com belongs that the NFF had already taken clear steps to help the former Sochaux of France midfielder including having him take part in an awards ceremony billed for February.

The official said, “He’s in hospital and getting better. Special thanks to the NFF President, Pinnick Amaju and his First VP, Seyi Akinwunmi for making it their business to have Wilson back on his feet. The NFF has big plans to bring him back into football starting with an awards ceremony planned for February where he will play some role and he will be at the World Cup with the Super Eagles.”

Last week new photos emerged of the former midfielder not looking his best self but his younger brother Dominic Oruma has revealed that he is in a Lagos hospital and much better now.