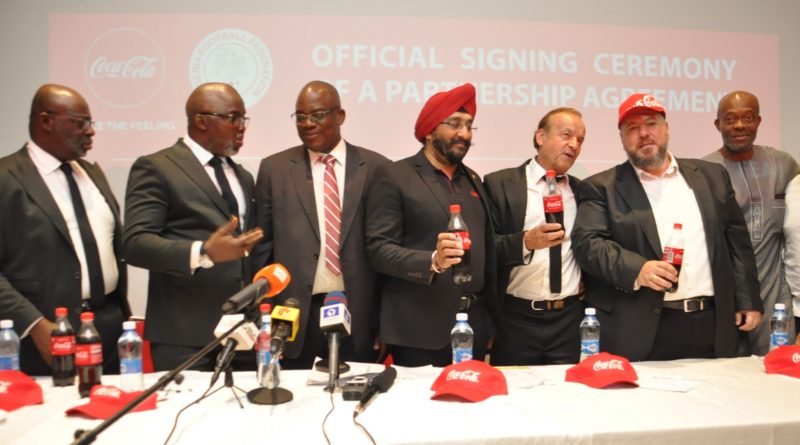 The Nigeria Football Federation and Coca-Cola Nigeria Limited on Wednesday in Lagos consummated a partnership agreement that made the beverage company Official Soft Drink and Co-Sponsor of Nigeria national teams.

Cletus Onyebuoha, Head of Strategic Marketing (Sparkling) at Coca-Cola’s West Africa Business Unit comprising 33 countries with 45% Africa population, said, “We are proud and excited to partner with the Nigeria Football Federation as a sponsor of the Nigeria National Teams. Historically, Coca-Cola has always been in the forefront of corporate support for the development of football in Nigeria.

“This sponsorship of the Nigeria National Teams is a further demonstration of Coca-Cola’s commitment to football in Nigeria at all levels and our support for communities where we operate. Everyone knows that Coca-Cola is the Official Global Partner of the FIFA World Cup Russia 2018.”

President of Nigeria Football Federation, Amaju Melvin Pinnick said, “We are delighted to be associated with a super brand like Coca-Cola. A lot of good is happening to Nigerian football all round and I want to commend m embers of the NFF Executive Committee and Management for the giant strides.

“It is heart-warming that Coca-Cola has chosen to come into sponsorship of the Nigeria National Teams at a time that we are all committed to the mission of achieving the best-ever outing for Nigeria (and Africa) at the FIFA World Cup finals, and to take the other teams to the next level while building a sustainable football culture for the country.”

“We also intend to commission at least two football pitches in each state of the federation and the FCT within the next five years. This is part of our efforts to take football back to the grassroots.”

The Permanent Secretary, Federal Ministry of Youth and Sports Development, Olusade Adesola, who represented the Minister, commended Coca-Cola for the move and appealed to other corporate bodies in the country to emulate the soft drink giants.

“I am elated that a global brand like Coca-Cola has found Nigerian Football worthy to partner with. This decision certainly underscores the growth of the Nigeria game, and support such as Coca-Cola’s will enable the sports sector to maintain its upward trajectory for the good of the Nigerian youth and the Nigerian nation.”

Managing Director of Coca-Cola Nigeria Limited, Bhupendra Suri and the Managing Director of Nigeria Bottling Company, Georgios Polymenakos also expressed their excitement at the agreement, while congratulating the NFF and the Super Eagles for qualification to 2018 FIFA World Cup finals.

NFF 2nd Vice President/Chairman of Marketing, Sponsorship and TV Rights Committee, Shehu Dikko, explained that the initial contract is for a period of five years and worth $4 million, and also renewable.