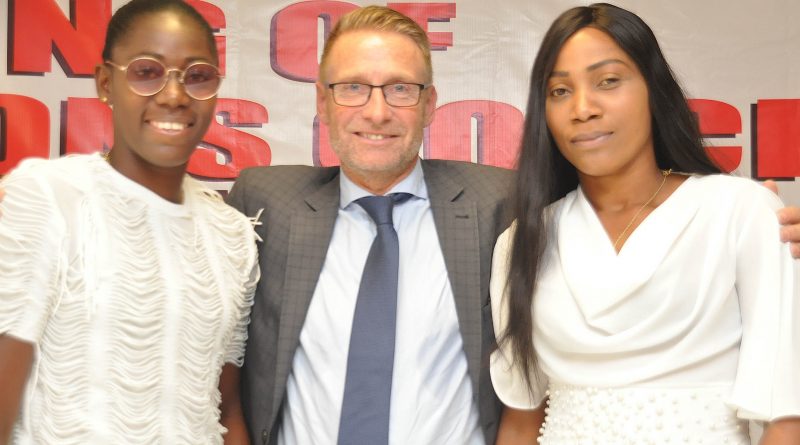 The Amaju Pinnick-led Nigeria Football Federation made another big mark on Tuesday with the unveiling in Abuja of Mr. Thomas Dennerby, a former coach of the women’s national team of Sweden, as Coach of the Super Falcons.

In announcing Dennerby’s appointment last week, NFF second Vice President/Chairman of Strategy, Shehu Dikko, said, “The NFF decided to go for a coach of the calibre of Thomas Dennerby for three reasons: to sustain and enhance the Super Falcons’ dominance on the African scene; to take the Falcons and the other women teams to the next level of challenging for laurels at global competitions like the Olympics and the FIFA World Cup and; to generally lay the foundation for the real development of women’s football in our country.”

On Tuesday, at a ceremony inside the Conference Centre of the National Stadium Complex, Abuja, the NFF confirmed that Dennerby’s contract will last till after the 2020 Olympics in the initial, with the right for automatic renewal subject to meeting of performance milestones. Before then, the Swede will have the opportunity to prove himself at the 2018 and 2020 Women Africa Cup of Nations competitions, the 2019 FIFA Women’s World Cup finals and the Women’s Football Tournament of the Tokyo Olympics.

“We believe we have the right man to take the Super Falcons and women’s football in Nigeria to the next level. Undoubtedly, we have been doing very well on the African continent, with eight titles out of 10 AFCON competitions so far. However, we went all out for a man of Dennerby’s pedigree and capacity because we want the Falcons and the other teams to win laurels at global championships.

“As a Federation, we will give Mr. Dennerby and his assistant Petersson, as well as his Nigerian assistants all they require to succeed,” Dikko said at the unveiling.

Dennerby said: “I am ready for the opportunity and the challenge of working with an amazing team like the Super Falcons. I believe we can all work together to close the gap between them and the big women football –playing nations of the world.

“I believe in hard work. I am happy to be here and we are going to work together for the success of the team. Every individual player of the team is important, but the cohesion of the team is paramount. I will be placing a serious demand on the players to give their best in training, physical fitness and in every competition. My philosophy is to develop the players and to work with the backroom staff.”

Dennerby’s assistant, Petersson, has worked with several top Swedish clubs and was assistant coach of the Swedish U23 women team between 2006-2012.

NFF General Secretary, Dr. Mohammed Sanusi, said that Dennerby has already been assigned with a personal car and a driver.

On her part, Chairman of NFF Women’s Football Committee, Ayo Omidiran expressed belief that the appointment of Dennerby was well-thought-out and she expects a turn-around in the fortunes of the Super Falcons at major championships.

Work begins immediately for the new crew as the Falcons will compete in the 8-Nation WAFU Women Cup of Nations taking place in Cote d’Ivoire 10th -24th February 2018.