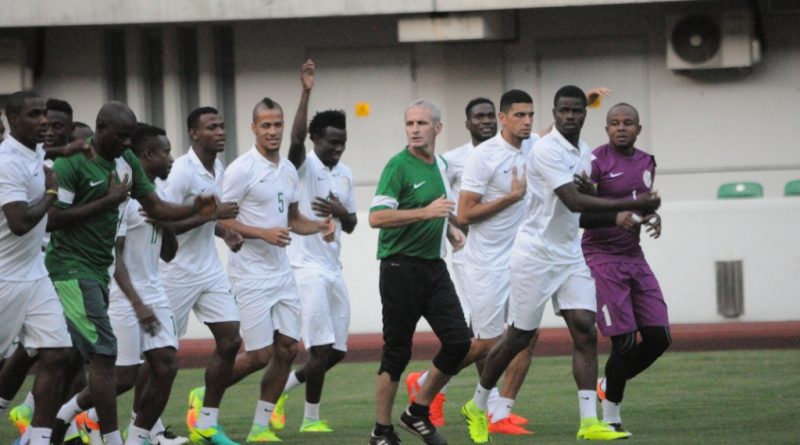 Ikechukwu Ezenwa became the Super Eagles player to be certain of a starting spot when Nigeria take on Cameroon on Friday in Uyo, Extrasportsnigeria.com reports. The goalkeeper, who captained Nigeria’s Africa Nations Championship squad that eliminated Benin Republic to qualify for next year’s continental finals in Kenya, will start in goal for Nigeria against Cameroon in Friday’s 2018 FIFA World Cup qualifying cracker Eagles coach Gernot Rohr announced on Wednesday.
He announced this at the team’s press conference held at the Ibom Meridien Hotel, Uyo.
South Africa-based goalkeeper Daniel Akpeyi, who was in goal in the November 2016 match Nigeria won 3-1 over Algeria at the same venue, has finally been ruled out of action as a result of injury.
Former junior international Dele Ajiboye, who is number one goalkeeper for Nigeria Professional Football League table-toppers Plateau United, has been called in to replace Akpeyi.
Rohr also expressed joy at the return to the fold of defender Leon Balogun.
Rohr, in praising the qualities of Balogun, said Eagles “lacked certain steel in defence” against South Africa in his absence and hopes the renewing his partnership with Ekong would provide the team with the kind of quality needed to beat the Indomitable Lions.
Balogun expressed delight at returning to the team and overcoming the injuries that kept him out. As at Wednesday afternoon, there had been no definite word from the Cameroonians to the Nigeria Football Federation as to their arrival time or mode of transport into Nigeria which is seen as normal antics of many African countries at the big stage.
Friday’s showdown at the Godswill Akpabio International Stadium will kick off by 5pm.