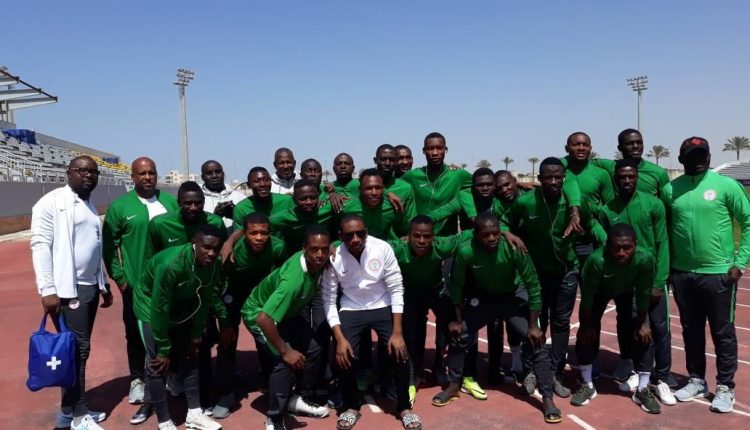 Nigeria’s U20 boys, Flying Eagles, were on Saturday forced to a 2-2 draw by their Guinea Bissau counterparts in the first leg of a 2019 Africa U20 Cup of Nations first round qualifying fixture in Bissau.

The Flying Eagles dominated the opening period and led 2-0 at the Cape Verdian referee’s whistle for the interval, thanks to a brace by Wasiu Alalade in the 15th and 35th minutes.

However, the hosts returned to the contest in the second half super-charged, and returned the Nigerian compliment to render the fixture delicately-poised ahead of the return leg in Nigeria in a week’s time.

Coach Paul Aigbogun blamed his boys for losing concentration in the second period, but expressed confidence that the seven-time African champions will do the job in the concluding encounter in Nigeria.

Both teams clash again at the Udoukaha Jacob Esuene Stadium, Calabar on Saturday, 19th May 2018, with the winner on aggregate to proceed to the second round of the qualifiers where the winner of the Guinea/Mauritania fixture awaits.

Meanwhile, the Nigeria Football Federation has expressed appreciation to the Ambassador of Nigeria to Guinea Bissau, Adeyemi Ambrose Afolahan who received the team and treated players and officials to a welcome dinner in Bissau on Friday. Also at the dinner were NFF’s leader of delegation, Alhaji Musa Duhu, Mr. Abdulrafiu Yusuf (Assistant Director, Technical) and Dr. Christian Emeruwa (Integrity Officer).

The Commander of the Nigerian contingent and deputy force commander of the ECOWAS Mission in Guinea Bissau, Colonel Taye Ahmed, also visited the Eagles at their official training session on Friday.