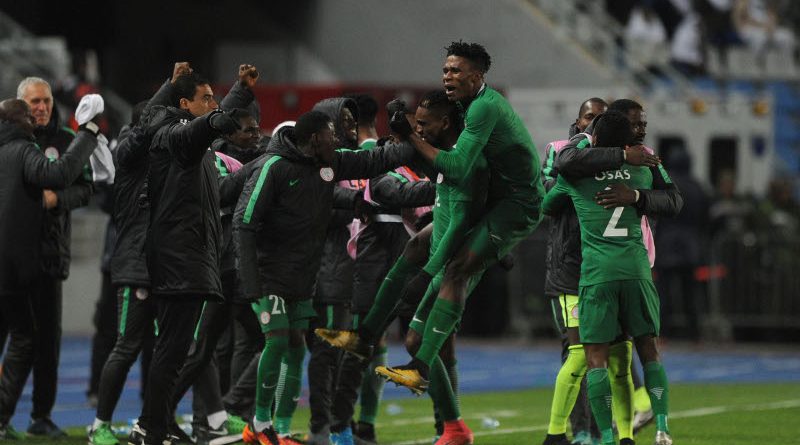 Super Eagles B grabbed a semi final ticket of the 2018 African Nations Championship with a 2-1 comeback win over Angola. The match was played Sunday at the Grand Stade de Tanger in Morocco.

Eagles rallied back from a goal down scored by Angola’s Vladimir Vá’s until less than three minutes to the end of the match. Goals from Anthony Okpotu and Okechukwu Gabriel Nigeria in stoppage-time and extra-time respectively saved the day for Nigeria.

Nigeria will now battle Sudan in Marrakech on Wednesday for a place in the final.

The Eagles could have gone up very early but Okpotu failed to find the back of the net after breaking straight through on goal within the opening 20 seconds of the match played on a very cold evening in Tanger.

The Man-of-the-Match, Ikechukwu Ezenwa stopped Calesso Manu on three occasions as Angola recovered from a slow start and pressed harder. Many more miss and saves would come up.

Palancas Negras duly opened the scoring in the 55th minute as Vladimir Vá’s shot deflected of Timothy Timothy and into the back of the net.

Everything seemed to be going Angola’s way as Gabriel hit the woodwork in the 76th minute before he squandered another gilt-edged chance to level matters seven minutes later with the goal at his mercy.

With the seconds ticking away, Nigeria sent a free kick from inside their own half into the Angolan penalty box and Rabiu Ali’s flicked header fell to Okpotu who this time put away the equaliser and sent his team-mates into wild celebrations.

Just before the break in extra-time, Gabriel drove across the area, finding himself some space, and managed to cut his shot back across goal and in, to seal the win for Nigeria.