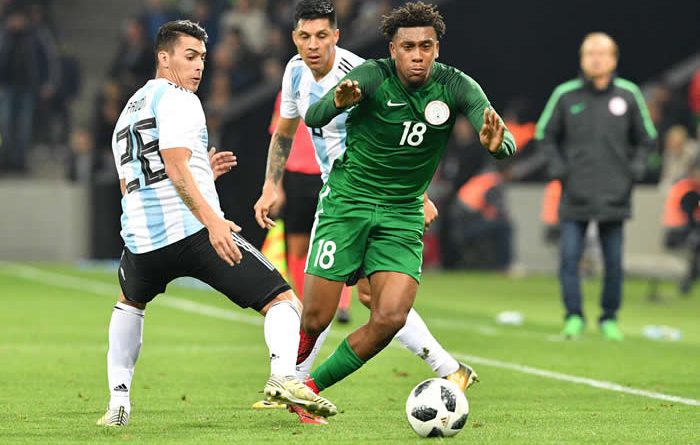 Argentinean star, Sergio Aguero fainted during half-time of Argentina’s friendly with Nigeria in Russia and was quickly taken to hospital. The medical issue was part of the highlights of Tuesday night as Nigeria defeated Argentina 4-2.

The Manchester City striker took ill in the changing rooms and was replaced by Dario Benedetto for the second half. Aguero had put his side on the lead scoring his side’s second goal, and becoming the Albiceleste’s third-highest scorer in doing so.

But the 29-year-old suffered health issues at the interval and had to exit the Stadion FK in Krasnodar in order to receive medical treatment. He later recovered consciousness, according to TyC Sports. And Argentina’s manager Jorge Sampaoli has since revealed that Aguero was suffering from dizziness.

In the match the South Americans gave their fans more to worry about when they fell apart and lost 4-2 to Nigeria in a friendly after squandering a two-goal lead.

Argentina coach Jorge Sampaoli rested Lionel Messi following their 1-0 win over Russia on Saturday and it seemed that they could cope without him as Ever Banega and Sergio Aguero put them in control.

Banega curled in a free kick, awarded after Nigeria goalkeeper Daniel Akpeyi picked the ball up outside his area, in the 28th minute and Aguero finished off a sweeping counter-attack eight minutes later.

And then Kelechi Iheanacho inspired the Nigeria fightback. First, he emulated Banega by scoring from a free kick on the stroke of halftime and then set up the equaliser by pulling the ball back for Alex Iwobi to stroke into the net seven minutes after the re-start.

The Super Eagles took the lead two minutes after that when Brian Idowu, making his debut for Nigeria, sidefooted home from the edge of the area to finish off a counter attack.

A superb goal by Iwobi completed the comeback in the 73rd minute as he collected the ball, slipped it between Javier Mascherano’s legs and fired past Agustin Marchesin.

Argentina staggered through their World Cup qualifying campaign, only clinching their place at the finals with a 3-1 win in Ecuador in their final match.