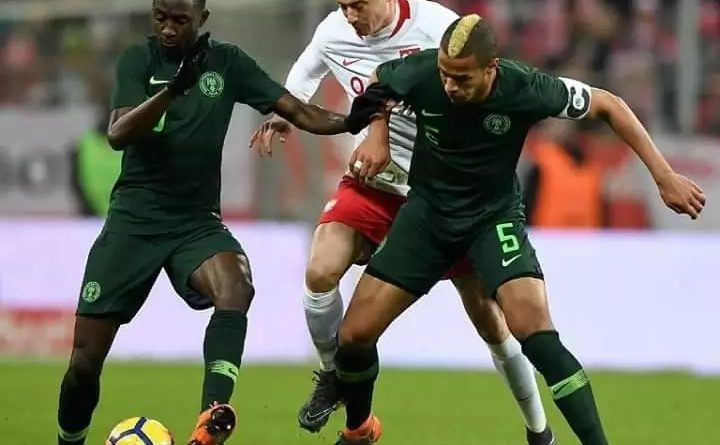 The Super Eagles on Friday defeated the Poland 1-0 in a friendly match played in Wrocalw, Poland.

The Eagles won the encounter with a lone goal scored by Victor Moses.

Moses’ second-half penalty came after much pressure and attempts on goal by the Poles at the Stadion Miejski Wroclaw.

Poland got the game’s first attempt, as Robert Lewandowski struck the upright with Francis Uzoho in goal for Nigeria well beaten. Lewandowski again found space at the edge of the area but his effort was comfortably saved by Uzoho. Nigeria matched their Polish counterparts and Odion Ighalo came close with a header off Victor Moses’ free kick. In what first looked like a goal, Leon Balogun cleared the ball off the line at the 42nd minute.

When the second half commenced, Uzoho who appeared jittery at the start had gained more confidence to deny Lewandowski from close range. Uzoho showed more composure in the last stages as Nigeria away with victory.

Eagles next game is on Tuesday with Serbia at the Hive Stadium in London.

Nigeria coach Gernot Rohr made five changes to the side that defeated Argentina 4-2 in last year. Deportivo de La Coruña goalkeeper Uzoho started in goal ahead of Enyimba’s Ikechukwu Ezenwa. Ezenwa was indeed the last player to arrive in camp for the match.

The biggest changes saw returnee Joel Obi starting in place of Eddy Onazi and in the absence of Mikel Obi and Onazi on the bench, Bursaspor defender William Troost-Ekong became the team captain.