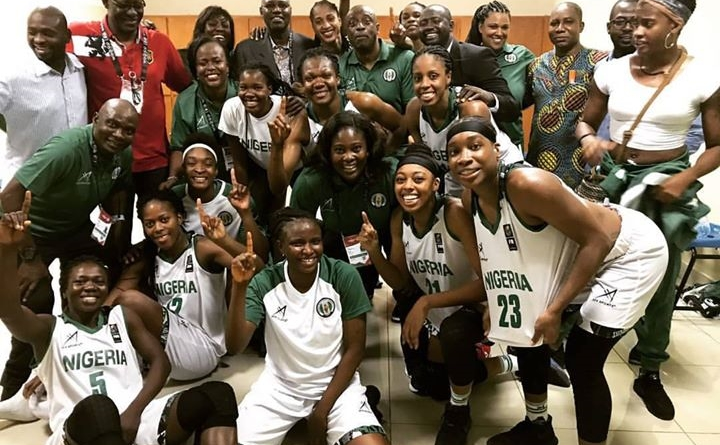 Pius Ayinor
Nigerian ladies proved more than just a team as they were crowned African champions Sunday night in Mali, Extrasportsnigeria.com reports. D’Tigress defeated Senegal 65-48 in the final match played in Bamako to round off the 2017 African Nations Cup for Women tagged AfroBasket Women 2017.
Nigerian women had already booked a ticket to the 2018 World Cup in Spain by qualifying for the final in Mali after they defeated hosts Mali in the semi-final. D’Tigress not only won the trophy on Sunday but they also achieved that in a most impactful way by winning all eight matches played in Mali from the group stage through the knock out levels. They will thus campaign in Spain in September 2018 as African champions.
The win over the Senegalese on Sunday was the second within one week as Evelyn Osaretin Akhator had powered Nigeria’s offense when D’Tigress defeated Senegal 58-54 in the last Group B match played on Wednesday. On Sunday she made 13 points against Senegal to lead in scoring for Nigeria.
On Sunday the Senegalese took the early lead winning the first quarter 18-12. But before their supporters could believe in a huge win, Nigeria fought back and won the second quarter at 21-10. This second quarter rally would eventually define the outcome of the match as D’Tigress established a lead and never looked back. Nigeria won the third quarter 15-7 and capped it with a 17-13 hold out at the championship buzzer.
Nigeria won the first African cup in Mozambique in 2003 under American coach Sam Vincent who also took charge in Mali this time. Nigeria successfully defended the title in Abuja two years later but failed to replicate the top performance in the following years. In 2015 they lost to hosts Cameroon in semi finals but returned home with the bronze medal pushing aside, again Senegal.