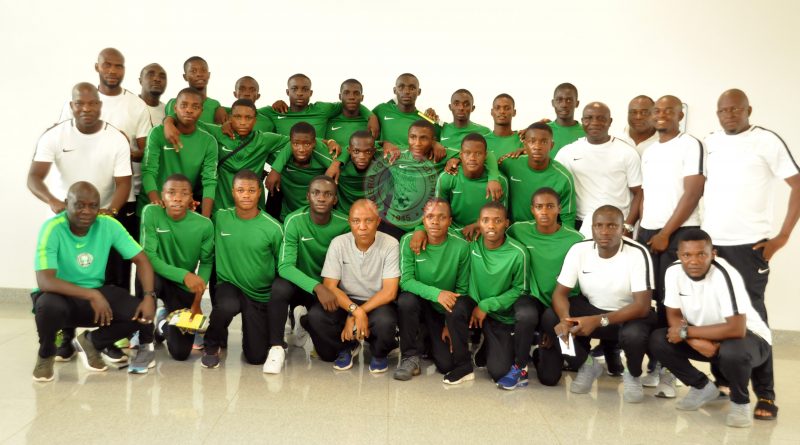 Olakunle Olusegun earned the ticket to the tournament semi finals and to Brazil 2019 when he hooked a 21st minute penalty to the roof of the net with Angola’s goalkeeper Geovani stranded. But the Golden Eaglets lost many more other chances.

As happened against host nation Tanzania on Sunday, the Eaglets proved to be masters of use of space and close control, but they mostly lacked the right ideas and punch in the final third, just as some passes went astray at critical moments.

Two-goal hero against Tanzania, Wisdom Ubani could have been on the scoresheet in the 11th minute but his fierce effort from a 22 –yard free kick went narrowly off target.

Angola were not to be brow-beaten, as Zito latched onto the ball a few metres from the centre and unleashed a rocket that goalkeeper Sunday Stephen, in for the jittery Suleman Shaibu, did well to punch away.

Three minutes later, Stephen had to be alert to push away another fierce Angolan shot, but two minutes later, at the other end, Ubani’s swift turn and shot came quite close with Geovani beaten.

An Angolan defender handled the ball in the box under pressure in the 21st minute, and Olusegun made no mistake from the spot to put Nigeria in front.

They could have had many more, but Shedrack Tanko bundled against the upright in the 42nd minute when it appeared easier to score, and Olusegun’s effort to chip Goevani from a swift counter was well-read by the goalkeeper.

In the second period, the Eaglets’ profligacy continued, even after the Angolans were reduced to 10 men in the 51st minute as Jose Cabincano earned a second yellow card. In the 53rd minute, Ubani’s stinging shot from 25 yards went narrowly over, and on the hour, when it appeared easier to score, Ubani passed the ball to onrushing Olusegun who missed from close range.

Substitutes Ibraheem Jabaar, Divine Nwachukwu and Peter Agba could not effect any improvement in the Eaglets’ game, and Nwachukwu even missed a glorious opportunity with six minutes to the end.

The win means that the Eaglets return to the FIFA U17 World Cup after missing out of the last edition staged in India two years ago.

Nigeria will certainly finish at the head of Group A if they avoid defeat against Uganda at the same venue on Saturday.