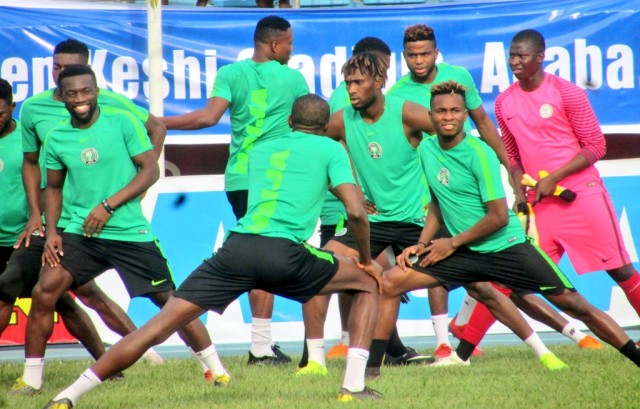 Nigeria’s U23 Olympic football team are in Omdurman to face Sudan today as the final round of 2019 U-23 Africa Cup of Nations qualifiers continue.

Fourteen African teams will battle in two-legged ties over the next five days to join hosts Egypt for the finals in November. The final cup games in Cairo will not only decide the continental champions but also determine the three African qualifiers for the men’s football tournament at the 2020 Olympic Games in Tokyo.

Nigerians have a tough job to do in the the clash at the Al Merrikh Stadium tonight.

On Friday Ghana and Cameroon will host Algeria (in Accra) and Tunisia (in Yaoundé) respectively, while regional rivals South Africa and Zimbabwe renew hostilities with an evening match at Orlando Stadium. The Zimbabweans are hopefully travelling for the game against the backdrop of xenophobic attacks in South Africa.

And then on Saturday the first leg matches will be wrapped up with Ivory Coast hosting fellow West Africans Guinea in Abidjan, before Morocco welcome Mali to Marrakech.

The return leg match for the Zambia v Congo tie will be played on Sunday 8 September, with the remaining ties completed on Tuesday 10 September.

Nigeria will host Sudan at the Stephen Keshi Stadium in Asaba.