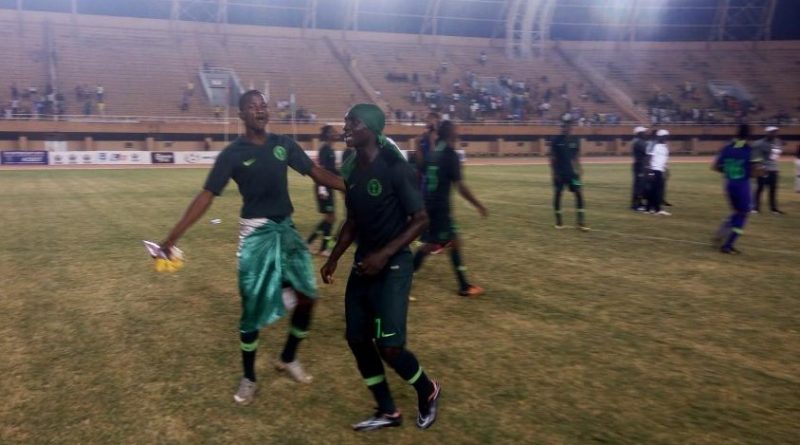 Nigeria rode boldly back to the Africa U17 Cup of Nations after the Golden Eaglets defeated Ghana’s Black Starlets 3-1 on penalties (following 1-1 in regulation time) in the final of the CAF U17 WAFU B Qualifying Tournament in Niamey on Saturday.

An entertaining encounter at the Stade General Seyni Kountche saw the Starlets shoot into the lead in the 54th minute, but the Eaglets equalized minutes later when Akinkunmi Amoo finished brilliantly, sending the Nigerians in the stands into ecstasy.

Both teams tried hard but failed to get the winner in the regulation time, and the game had to go into penalties. Samson Tijani, Muhammad Ibrahim and David Ishaya scored for Nigeria, and even though goalscorer Amoo missed, the Eaglets were winners as the Ghanaians fluffed a kick and Nigeria’s goalkeeper John Amah saved another of their kicks. There was no need for the final kicks as the Eaglets were by then, unassailable.

Victory was confirmation of Nigeria’s edge over Ghana in cadet football, with Nigeria posting five world titles to Ghana’s two, and was also somewhat sweet revenge for Ghana’s victory in the final of the maiden edition of the Africa U17 Cup of Nations in Mali 23 years ago.

Before the final, President of the Nigeria Football Federation, Amaju Melvin Pinnick had promised the Eaglets training tours of Qatar and Jordan before their participation in the Africa U17 Cup of Nations taking place in Tanzania early next year should they emerge champions and qualify.

At the end, the organizers chose Nigeria’s Samson Tijani as Most Valuable Player of the Tournament, while the nimble-footed Olakunle Olusegun was top scorer with four goals.

The Golden Eaglets’ delegation will return to Nigeria on Sunday.