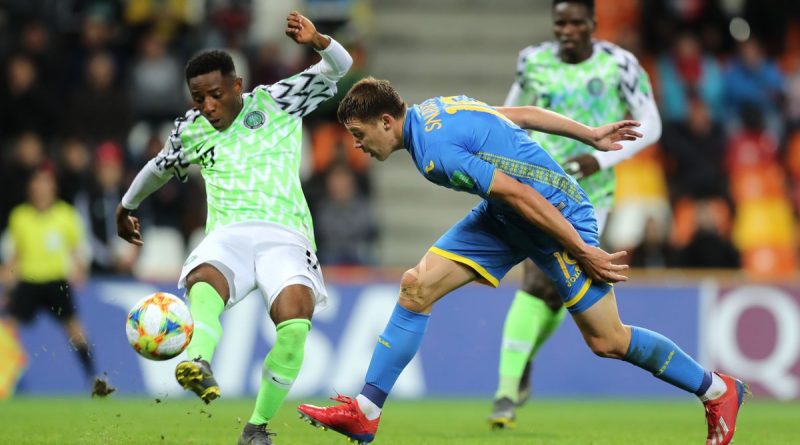 The Flying Eagles forced group D winners Ukraine to a 1-1 draw in Bielsko-Biala on Thursday night to earn a place in the Round of 16 of the FIFA U20 World Cup finals in Poland. Nigeria qualified as one of the best third-placed teams.

Team USA’s second half strike that scooped the three points for the Americans shot them to second in the group, ahead of Nigeria. But Nigeria’s opening day basket of goals against Qatar helped their cause at the close of business.

Though Groups E and F still have to play on Friday to determine, on the whole, the four best third-placed teams to progress, the Flying Eagles are second on that ranking now and cannot fall out of the top four.

Only either of Korea Republic and Portugal can overtake Poland, to push Nigeria to third on the ranking. Should Korea defeat six-pointer Argentina and Portugal ease past already-eliminated South Africa, three teams in group F would end with six points.

Panama, with one point and third in Group E, take on Saudi Arabia and would go to four points with a win. But they have two goals deficit and are unlikely to overtake Nigeria.

At the end of the day, it could mean that Norway, despite their astounding 12-0 defeat of Honduras in Group C on Thursday, would return home after the group stage.

Another interesting prospect is that the Eagles could end up facing Group A winners and fellow African flag bearers Senegal in the Round of 16, in the city of Lodz on Monday.

Danyle Sikan put Ukraine ahead in Bielsko-Biala on Thursday, benefitting from yet another patent lack of awareness on the Nigerian side. Tall goalkeeper Olawale Oremade failed to make his long limbs count from a cross ball, and Sikan easily met the ball to guide it into the net.

Tall forward Muhamed Tijani, who despite his natural advantage was always second best in aerial balls, fluffed a penalty kick in the 45th minute, but scored another in the 51st to draw the Flying Eagles level.