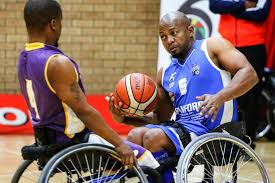 The stage is set for the semi-final and final of the 2019 edition of the Easter Wheelchair Basketball Championship holding at the Sports Hall of the National Stadium, Lagos. Team Rollers were billed to take on Team Achievers in the first match while Team Bose Kafo battles Team Sunshine right after on Wednesday, April 17th.

Eight teams are featuring in this year’s edition of the annual tournament put together by the Nigeria Wheelchair Basketball Federation in conjunction with Nigerian Wheelchair players in the Diaspora.

The 2-Day championship will wrap up much later on Wednesday as third place and final game will also be decided.