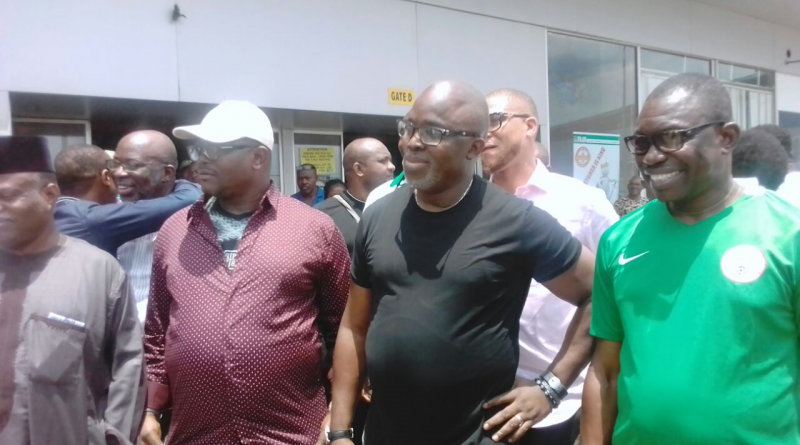 Nigeria Football Federation President and CAF Executive Committee member, Amaju Pinnick, has stated his determination to ensure that Nigerian football fully benefits from his new position in the continental body. Pinnick spoke at the Murtala Muhammed Airport in Lagos moments after he returned to Nigeria on Friday aboard an Ethiopian Airways flight from Addis Ababa reports Extrasportsnigeria.com.

He assured Nigerians that the country would play central roles in football development on the continent more than witnessed in recent times.

“We are still just celebrating,” he told reporters at the airport, “But there are a lot of things that will be going on in the next few days, which will generate tremendous improvement.

“UEFA, FIFA, Asia Federation are all happy about the new change, not just for Nigerians. Then as for Nigeria, of course I am now there, and Nigeria will be a major beneficiary of me being in CAF.

“You will see a lot of new things happening in the coming weeks as there will be lots of input from UEFA, FIFA. Other parts of the world are happy and have been contacting us already; we have a blueprint which will be harmonized by an international consultant in the coming weeks.”

He then added emphatically, “We (Nigeria) are not going to play a passive role, but an active role in the development of African football. I have been an integral part of this movement, and Nigeria will enjoy from this because whatever you see in CAF today started in Nigeria.”

Pinnick who was visibly elated by the reception he received on arrival also thanked Nigerians who stood by him. The football supporters club were at the airport in numbers to drum loud his victory and that of Ahmad Ahmad as the new CAF president.

“I also want to thank my host governor, Akinwunmi Ambode, and the governor of my state, Henry Okowa.”

He then added, “I would also like to apologise to people I may have offended during the course of my ambition to get into this position. I want to say I’m sorry. This will be a building block for us.

“And on behalf of the new President Ahmad Ahmad, I say we will do our best in making right so many wrongs, and taking African football to the next level.”

He also thanked his colleagues in the NFF board and others who understood his drive to be in CAF.

Pinnick defeated Republic of Benin’s Anjorin Moucharafu 34 to 17 votes on Thursday and is now representing the West Zone B in CAF until 2021 when fresh rounds of elections will hold. The Nigerian FA boss was one of the very few who spoke openly against the re-election of Issa Hayatou as the CAF president. Several of his personal interviews across the world created debates especially in his own country Nigeria. Many of his critics thought he was taking the wrong approach by publicly declaring his support for Ahmad.