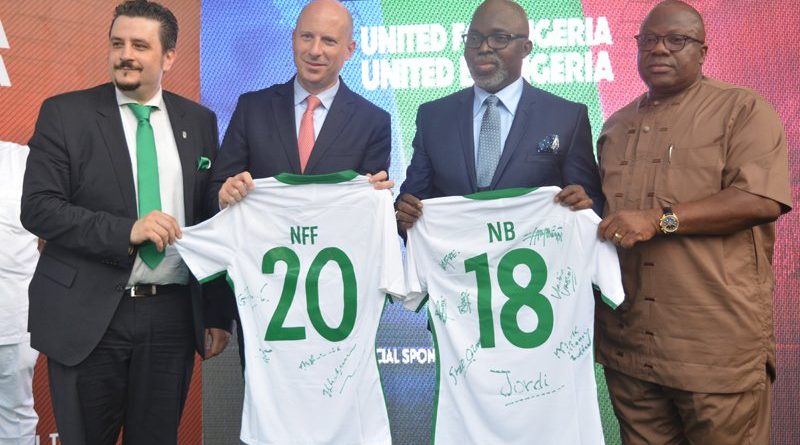 The Nigeria Football Federation and Nigerian Breweries Plc on Friday exchanged an agreement that both parties happily called ‘a minimum five-year contract – a bold statement that the relationship would last much longer.

At an impressive ceremony in the expansive grounds of the brewing giant in Lagos and anchored by Gbenga Adeyinka the 1st, NFF President Amaju Pinnick and NB Plc’s Managing Director/CEO Jordi Borrut Bel pledged the total commitment of their establishments to every letter of the contract.

A buoyant Pinnick restated his position that NB Plc is “an organization that has been a torch-bearer of excellence and corporate social responsibility for the several decades it has operated in Nigeria.” Bel reiterated, “We are indeed delighted about this partnership between Nigerian Breweries plc and the Nigeria Football Federation (NFF). This relationship provides us an opportunity to celebrate the true Nigerian spirit that is fuelled by patriotism, passion and desire for victory, through the platform of Football.”

Pinnick said, “There were other companies that were interested in these categories but once Nigerian Breweries landed, they landed with conviction, with panache and with finality. We are happy to be involved with them, and I must praise Pamodzi Sports Marketing chairman Mike Itemuagbor, as well as Mitchell Obi and Ejiro Omonode for the roles they played in actualizing this wonderful relationship.

“The NFF is delighted to be in this relationship, and we want to assure you that Nigerian Football will meet your expectations all round.”

With 10 former Nigeria captains watching and the crème de la crème of Nigerian Football administration seated, it was no surprise when NB Plc’s Marketing Director, Franco Maria Maggi declared, “We are not thinking of five years for this partnership. We are thinking of eternity. It is a dream that we have nursed for a long time. It is the ideal thing for Nigerian Breweries to partner with Nigerian Football. We are keen to win with Nigeria.”

NB Plc is set to commit the sum of N450million to the relationship every year, but Itemuagbor, a sports marketing titan who had brokered several relationships for Nigerian Football over the decades, said, “The important thing is not just the amount of money being paid as rights fee; it is the activation of the contract, which Nigerians Breweries and ourselves as the sponsorship agency are committed to doing in a big way.”