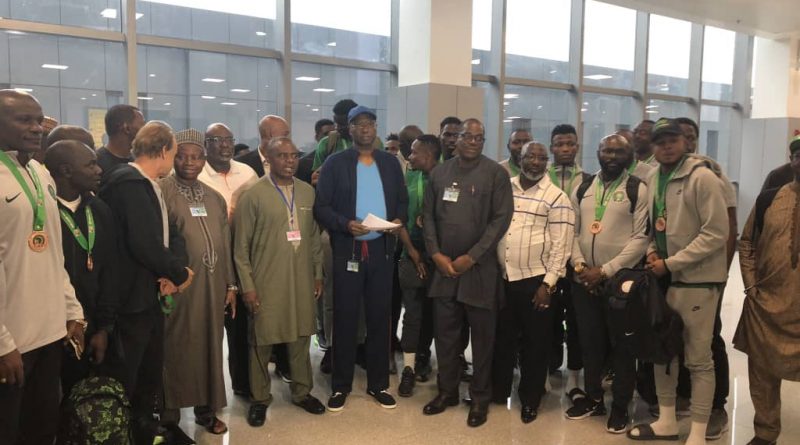 The Nigerian Government on Friday hailed the bronze medal-winning effort of the Super Eagles, as a team led by the Secretary to the Federal Government, Boss Mustapha, received the Nigeria delegation to the finals in Egypt, on arrival at the Nnamdi Azikiwe International Airport, Abuja.

A chartered Air Peace aircraft that flew the delegation from Egypt landed in Abuja at about 10.40am, led by the NFF First Vice President, Seyi Akinwunmi, and also including the 2nd Vice President Shehu Dikko, General Secretary, Dr. Mohammed Sanusi, Members of the Executive Committee, and players and officials of the Eagles.

Nigeria beat Tunisia 1-0 at the Al Salam Stadium, Cairo on Wednesday to win her eighth bronze medal title at the Africa Cup of Nations. Scorer Odion Jude Ighalo, who finished as top scorer in the entire qualifying series for the championship, is primed to be tournament top scorer with five goals.

Mustapha was quoted as saying that the Government of Nigeria was appreciative of their efforts in finishing third in a 24-team Africa Cup of Nations, the biggest in the history of the championship.

“We commend you for finishing third best in the whole of the African continent. We all wanted the first position but this is football where things sometimes do not go as you plan. The Government of Nigeria is quite happy with your level of discipline and professionalism and how you comported yourselves creditably as Nigerian ambassadors.

“The fighting spirit and resilience you demonstrated in Egypt is a reflection of the never-say-die spirit of the Nigerian. We want you to keep it up. I congratulate the technical crew led by Coach Gernot Rohr, the players and the staff of the team. I also wish to congratulate the captain of the team, Mikel Obi that we heard has now retired from international football. We wish him well and thank him immensely for his many years of excellent, patriotic service to the nation.”

On behalf of the team, Ahmed Musa thanked President Muhammadu Buhari and the Federal Government for the support given to the team before, during and after the AFCON 2019, promising that the Super Eagles will endeavour to do better at the next championship.