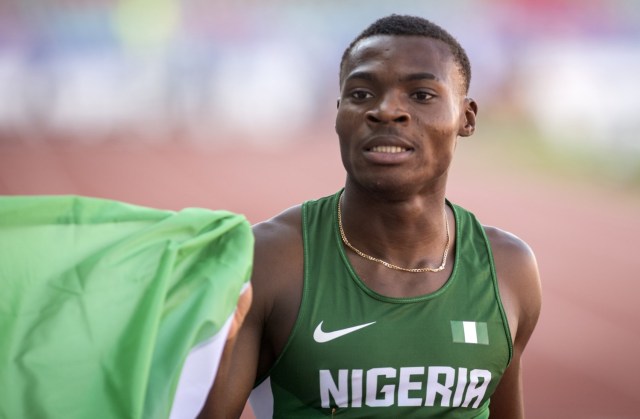 Ekevwo triumphed in a time of 9.96sec at the Moroccan capital’s Olympic Stadium in the Moulay Abdellah Sports Complex.

Ekevwo and Itsekiri times are their personal best times.

This is the first time since 2007 that Nigeria will win gold in the men’s 100m event at the African Games.

Ekevwo already gave a glimpse of what to expect as he was the fastest through the first two rounds of the men’s 100m, winning his heat in 10.20secs and dominating his semi final in 10.26secs.

Itsekiri was also impressive, taking the win in his heat in 10.27secs to finish ahead of Ivory Coast’s Arthur Cisse who placed third in 10.30secs.

After the race Raymond said, “I just want to give glory to God; I have been working for this day. I just came here did the right thing and executed by race, I just feel very happy.”

Nigeria’s fastest man ever and African record-holder, Olusoji Fasuba, was the last to win a 100m gold medal for the country at the African Games.

Aside from Fasuba and now Ekevwo, the other Nigerians that have won 100m gold at the African Games are Chidi Imoh, Davidson Ezinwa and Deji Aliu.