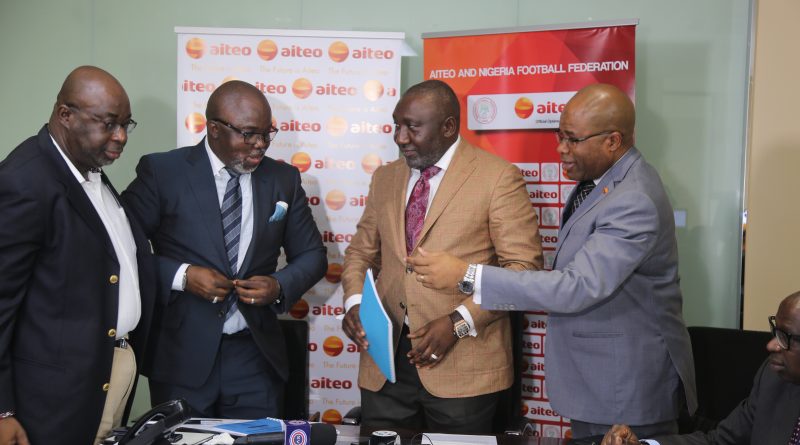 AITEO, one of Nigeria’s foremost energy solution companies, on Wednesday acquired the ‘Naming Right’ of the NFF Federation Cup, as an extension/addendum to the company’s sponsorship agreement with the Nigeria Football Federation. It is also part of the rights AITEO has under the original agreement.

Those rights will enable the acquisition of additional commercial assets from the NFF that are available and not encumbered, on a mutually –negotiated basis. To this end, the NFF Federation Cup, the oldest football competition in Nigeria, is henceforth to be known and addressed as “AITEO Cup.”

The duration of this aspect of the sponsorship is 5 years, similar to the main agreement (signed on 26th April 2017) on a Cost Value Arrangement and commencing from the 2017 season.  This arrangement will see AITEO underwriting the costs of the organisation of the competition which encompasses the costs of organising the competition from the Round of 64 to the men and women’s finals, solidarity support to Football Associations of the 36 States and the FCT, expenses and indemnities of match officials, support to participating Clubs, Media, Branding/Activation and Prize Money to winners.

The Cost Value Arrangement of the transaction is for NFF and AITEO to, annually, decide the nature and value proposition of the AITEO Cup under the framework of the relationship, and AITEO would thus underwrite the cost as the competition’s ‘Naming Right Holder.’

The NFF team at the contract signing inside AITEO Group’s Lagos office said it was “extremely delighted” by the extended agreement, while AITEO chieftains stated “we are happy to do this for Nigeria.”