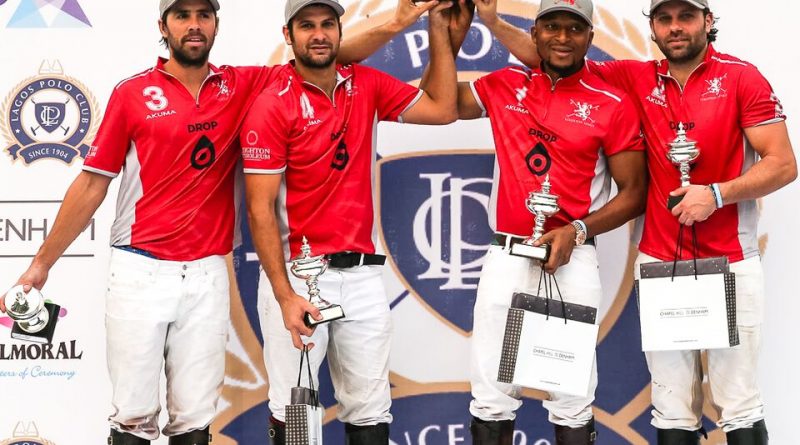 Lagos Leighton Kings emerged champions of the Open Cup by beating Lagos Lintex 11-5 as the first week of the 2107 NPA Lagos International Polo Tournament ended on Sunday.
Lagos STL 57 were the other winners of the day as they edged Ibadan Jericho 7-6 to win the Silver Cup in the first fixture. Ibrahim Musa Dantala was the match-winner for the home team in the 11-day two-phase tournament which has GTBank as main sponsor.
For the Open Cup, which had former Lagos State Governor, Bola Tinubu and a host of other dignitaries among the spectators, Leighton Kings, formed by Bowale Jolaosho (0), Hassan Fayad (+1), Martin Juaregi (+4) and Santiago Cernadas (+6), opened scoring by Cernadas’ 30 yards penalty.
Lintex, which featured Baba Dangote (+1), Bashir Dantata (+3), Halifa Ibrahim(+3) and Bello Buba (+4), threatened to score twice by Ibrahim who sent a long low-shot wide and beaten by the bounce as he broke away. Cernadas got the Kings’ second goal just before the opening chukka wound up.
Lintex’s captain, Dantata reduced the deficit connecting a long shot from Buba midway into the second chukka but Cernadas converted his a 60-yarder with about a minute left to make scores 3-1.
At 7-1in the fourth chukka, the match was already won and lost as Cernadas went on a showboat spree to thrill the large crowd.
Nigeria’s best player, Buba scored to make scores 7-2 but Fayad, nicknamed Killer, killed off the fighting spirit of Lintex scoring twice in the penultimate chukka for an unassailable 9-2 lead.
Jolaosho’s goal was sandwiched by two Dangote goals as the seconds ticked away with scores at 10-4. Dantata then scored Lintex’s fifth goal before Cernadas justified his status as the best handicapped player in the match scoring the last goal for a comprehensive win.
In the Silver Cup final, Tata Alikura (+2) won and converted a 30-yard penalty before Dantala (+2), who have been on top of his game all tournament, scored in the second minute to give STL 57 a 2 – 0 lead.
Jericho responded through their hitman Umar. Umar, a two-goaler with over 30 years of playing experience tied the scores 2-2 as the game hots up.
STL 57 completed by Lolu Agoro (-1), and Seyi Tinubu (-1), were made to trail for the first time in the tournament as Immigration officer, Edozie Onwuli (+1) scored in the last second to give Jericho a 3-2 lead at the end of the first chukka.
Nurudeen Akibu (0), and Umar scored in quick succession to extend the visiting team’s lead to 5-2 but Dantala got another goal to end the second chukka 5 – 3 advantage Jericho.
Umar took scores to 6 – 3 but Tinubu, the co-patron of STL 57, who was being watched by his dad, scored twice to keep the scores twice to reduch the deficit to just as goal heading to the final chukka of seven minutes.
Alikura levelled scores with just 3 minutes 50 seconds left before a brilliant individual goal by Dantala 72 seconds later gave STL a 7-6 lead. Dantala threatened to score more goals but time was far too spent, and at the end STL 57 were relieved to hear the buzzer.